I started thinking a little while back about how I would go about making a Witcher game based on an OSR system. I believe the biggest difference would be in the character creation, as the kind of characters you want to play (witchers) aren’t built the same was as most characters in OSR games. The typical pattern for such a character is the picaro, the roguish sort, and you roll stats to insert unpredictability and emphasize that the adventuring profession takes all comers. 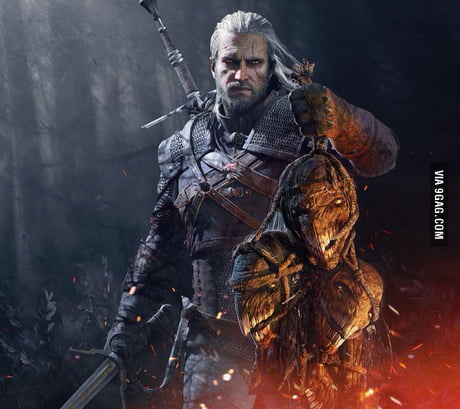 Witchers, on the other hand, are supposed to be a select and trained group, mutated to exceed normal humans and extensively educated in their profession. They’re not especially differentiated among each other by strength, or dexterity, or constitution. A character with bad rolls, even in single stats (especially the physical ones) would have been weeded out or killed in the process of becoming a witcher. Also, differentiated classes make less sense.

Instead, a better approach might be a low-randomness, statless, classless system built on the B/X skeleton (S&W, for me). The bulk of this change would be in player-facing character creation. Here’s what I’ve got so far.

HP starts at 3. These are abstracted hits, most monsters deal 1, some deal 2 or even 3, very small monsters don’t deal even that, status conditions or grappling.
Save starts at 6, roll at or under, up over time, or start at 15, roll at or over, down over time
Other stats, like attack and damage bonuses start at 0.
AC starts at 10+Armor bonus, 2 for light, 4 for medium, 6 for heavy

Simple so far, everyone starts in the same place. The classless part comes with simplified leveling. You gain ‘pips’, with which you can increase any number on your sheet by 1. Increase your attack bonus? Add 1. Increase the number of hits you can take? Add 1. Increase base AC? Add 1.

Starting characters have 3 pips. This means that, before the first adventure starts, they could feasibly have double starting health, or a +3 attack or damage bonus, or a natural AC equivalent to leather an shield. This produces characters that are tougher, deadlier and more experienced than equivalent ‘first level’ characters in B/X. This is very much intentional.

Magic and alchemy, which would surely be part of the game, I’m much less sure on. For a Witcher game, I’d need to make a bespoke quick magic system, same with alchemy. Ripping off the videogames is a good idea here.

As for XP, It might be preferable to use milestone or quest leveling. While witchers are in it for the money, they’re not plundering tombs, they’re taking up jobs and getting paid, which wouldn’t count towards XP under B/X. Pips upon completing quests, or for every few sessions, Mothership-style. Actually, I’d be lying if I said there wasn’t some substantial inspiration from Mothership here.

What do you think of this approach? How would you develop a high-powered, super-simple character system for OSR?

One route might be just to take Scarlet Heroes and treat the Rogue or Fighter class as the one character option, and all player characters branch out from that - Scarlet Heroes distinguishes between PCs and NPCs when it comes to damage dealt (PCs lose HP, NPCs lose HD) amongst other differences. It’s geared towards upping a PC’s power level so that one might be able to cope with a challenge for a whole party of regular PCs.

Alternatively, we’ve found that our homebrew hack, indirectly based off S&W White Box, is relatively forgiving for player characters. When reduced to 0HP, rather than die, PCs start losing carrying capacity, and only die when their inventory slots are all full. They’re not invulnerable - averaging one PC death every four sessions - but they can take some damage and suffer a mistake or two.

There’s also a ‘classless’ class, which seems quite similar to your pips idea: 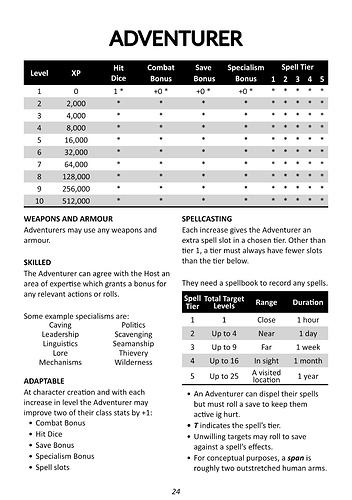 Since the system is largely based off using a single d6, a +1 is roughly equivalent across the character board. Combat combines hitting and damaging, and rolls to save or complete a challenging activity require a rolled total of 6. Attribute modifiers range from -2 to 2 (and those extremes are rolls of 3 or 18).

Just as an aside, has anyone tried the official Witcher ttrpg? Wondering if it aligns with what you’re working on here.

Didn’t know it existed, but I just looked at the quick start rules, and it really doesn’t. It’s more of a ‘play anyone in the Witcher world’ as opposed to my conception of ‘play a witcher’, with full rolled stats, derived stats, etc. Unfortunately not what I’m looking for.

Ahhh, okay. Was worth a shot! I wasn’t aware of the ttrpg until a few days ago - looked kinda interested at the least.

Some monsters doing one some two some three is a little bit predictable and mechanical especially in the Witcher world where you are supposed to be a monster expert. Its possible a system where you start with 3 hit dice instead, and monsters do a predictable die of damage would work better.

I think you’re saying what I meant. Player HP there is meant to be equivalent to HD, not HP. Most monsters deal 1HD of damage, some two, rarely 3, etc. Monsters still have normally rolled HP, and players still roll damage normally, this is all for the player end, to make them feel more like powerful experts and to streamline combat.