B2: The Keep on the Borderlands - Retro Module Review

Review for Dungeon Module B2: The Keep on the Borderlands
by PM Schramm

Introductory Dungeon Module B2: The Keep on the Borderlands. Included in the 1979 through 1982 editions of the Holmes Basic Set, this iconic module was meant to introduce new players to a lifelong hobby of fun and adventure. It depicts a fantasy world full of monsters, heroes, and the battle of Law and Chaos between them. Filled with a starting town, an intricate dungeon, and a wilderness area to explore, this module is a perfect example for referees to emulate when beginning their own campaigns - it even contains helpful hints on how to run a game, a section with tips specifically for the players, and a glossary of words that a fledgling novice may not know already before their first foray into the world of fantasy roleplaying. But, as it was written decades ago, does B2 still hold up under a modern eye? Does it still bring value to the table with so many years of content written and so many new adventures inspired by it? The answer is a resounding “yes.”

In true classic module style, Keep on the Borderlands is printed in an 8.5”x10.75” format with a removable cover and staple-bound interior booklet. The exterior of the cover is full-color and features artwork by Jim Roslof. While simple, the information the cover portrays before the referee even opens the module is quite comprehensive: the character levels appropriate for the adventure, a description of the contents, and some suggestions of what to play next from the TSR catalog. The reverse of the cover contains a large and clear map of the Caves of Chaos with numbered rooms and a legend on the right.

The module itself is within the 28-page paper booklet that’s included. Printed in a two-column format, every inch of the interior of B2 is packed with text, tables, artwork, lists, locations, maps, reference guides, and all the keyed locations for the Caves of Chaos map. There’s even some forms on the last page of the booklet that can be copied for the referee to use for mapping and NPCs.

So what makes The Keep on the Borderlands a good introductory module? One that still has value after all these years. It’s the content. Where B2 excels that many modules miss the mark on is its utility as an instruction manual on how to play a Basic Dungeons and Dragons style game. After a brief section describing what exactly a “Dungeon Master” does, the module dives into tips on what to expect and how to make the game fun. Various suggestions are provided such as having NPCs provide advice on how to tackle the caves, helpful retainers for soft parties, issuing magical items to make things easier, and leveraging the Keep as a base of operations. The next pages dive into step-by-step instructions on how to be an effective Dungeon Master, how to keep proper track of time, dividing treasure and experience points, and how to adequately prepare the module for use at your own table. These may all seem to be basic things that any Dungeon Master worth their salt should be capable of doing on the fly already; however, even professionals practice the basics, and a review of these tips, even for the experienced referee, will further enforce these habits for those who know them and help plant the seeds for those who do not.

Before diving into the module proper, if one examines the last few pages of B2, there are a few more introductory pieces to note: tables to help roll up NPCs, tips on how to design floor plans, and, most importantly, some tips for the players. Referees are always striving to better themselves, but oftentimes questions are posited on how players succeed in old school style games known for their deadliness. The answers are right here: cooperation and organization amongst themselves and with the referee, proper planning and equipment, leveraging cautious play, and, above all else, the usage of their intellect to overcome adversity. “The game is designed to challenge the minds and imaginations of the players. Those who tackle problems and use their abilities, wits, and new ideas will succeed more often than fail. The challenge of thinking is a great deal of the fun of the game.”

All that said, the adventure itself is excellent too. Everything is laid out in a way that makes it easy for the referee to run, with DM notes and tables that assist where necessary. There are three main sections to B2. The first is the Keep itself, which includes everything a starter town needs including fully statted NPCs with listed equipment, disposition, and how they interact with each other. The second section is a primer on adventures outside the Keep, which gives brief detail into the rules on how to navigate a hexcrawl along with a few keyed locations and their inhabitants. The final and most comprehensive section is that of the Caves of Chaos, an incredibly complex starter dungeon with multiple factions at war or allied with each other and a full 64 keyed rooms, all interconnected with secret pathways and hidden tunnels. Appropriate artwork is interspaced throughout the module, and there are maps and tables that aid in running the adventure contained directly in the center of the booklet, so they’re easy to find. That said, these tables do split up one of the keyed locations mid-sentence, which isn’t ideal.

While there are many pieces of the module devoted to usability, there are some areas where improvement could be made. For one, none of the NPCs are named, so a referee will have to come up with a name on the spot. This does allow the adventure to be placed into any setting without having to rename the NPCs; however, a referee would have to do that anyway so not including names for the assumed setting is unfortunate. In addition, there isn’t any pre-generated plot material here. There are factions that are at odds with each other and the eternal battle of Law and Chaos happening in the background, but if a referee’s group isn’t motivated by exploration and treasure then a reason to search the wilds will need to be created. This can be problematic, especially if a referee has veteran players more familiar with later versions of Dungeons and Dragons such as 5e, where orcs and other creatures are more humanized. There are even many situations in The Keep on the Borderlands where there are monster younglings included in the room descriptions. In the assumed setting for this adventure, monsters such as orcs and lizardmen are Chaotic and nothing can change or sway that. There are no nuances here - Law purges Chaos. This could cause some discomfort at the table if the players don’t realize this. In B2, the only good orc is a dead orc; a referee should expect to emphasize the evil nature of these creatures if they expect this will become a problem. Things such as the horrible entryway of decapitated dwarven, elven, and human heads in area B, the torture chamber in room 24, or the slave pen in room 40. Another tip would be to have the monsters gambling with human knucklebones, or drinking ale from bleached human skulls.

The combination of tips and tricks for the new, or experienced, referee and an intricate town and dungeon setting make The Keep on the Borderlands a standout, even decades after its initial release. Reading material like this really shows the expertise of the medium Gary Gygax and company at TSR had and the love and care put into these initial modules. Picking this adventure up was a joy, not only for its historical value, but also for the game-able value that can be immediately put into use at the table. While not everyone is playing Basic Dungeons and Dragons any longer, the amount of imagination that went into the production of B2 shows why the OSR scene exists to this day. Ignoring pieces like this would be a shame, and everyone who has not read it should go out and pick up a copy of this classic of goblins, orcs, bugbears, owlbears, minotaurs, magic, and Evil Chaos. 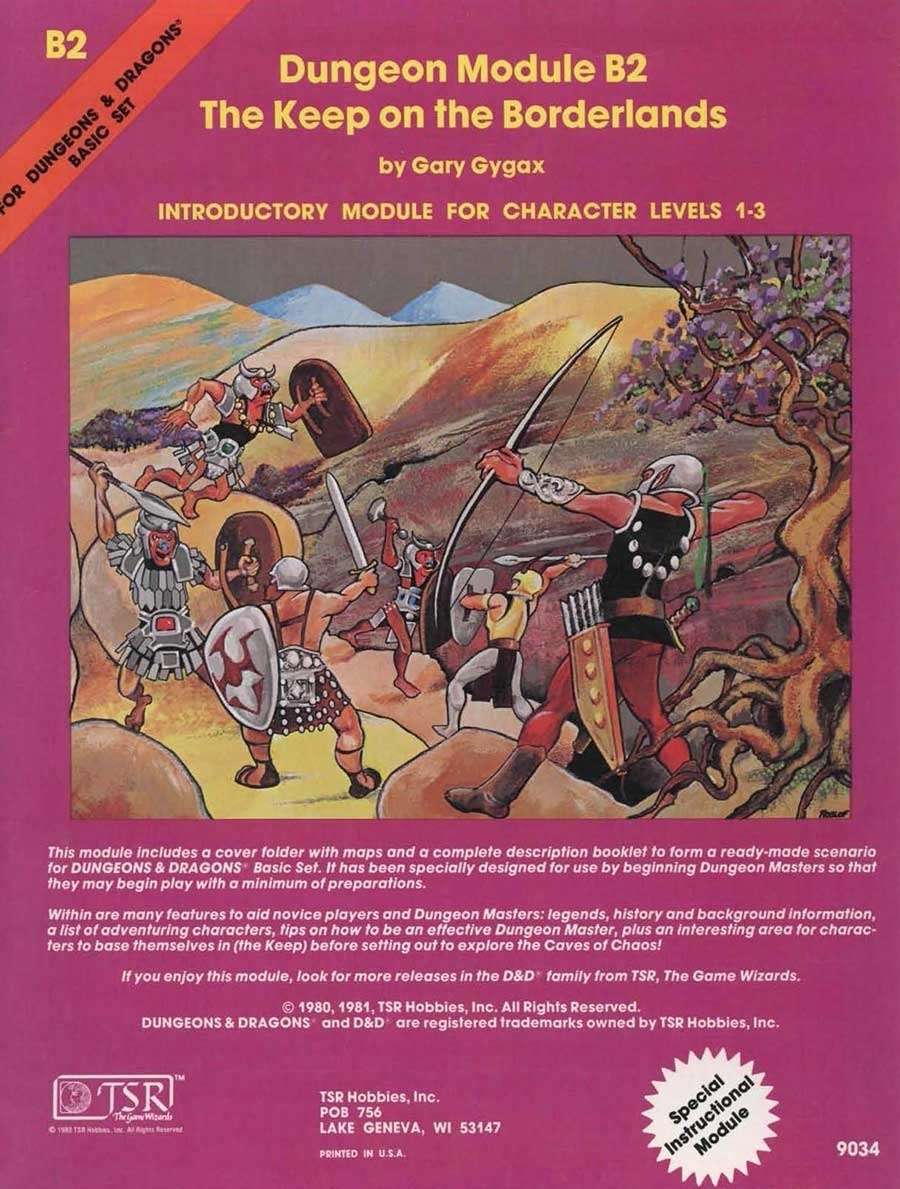 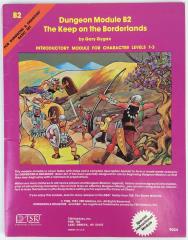 Keep on the Borderlands, The (4th Printing) - Basic D&D from TSR