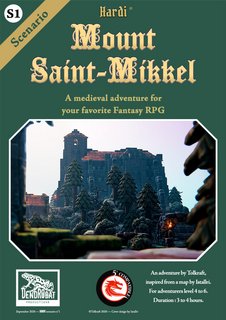 ‘Mount Saint-Mikkel’ is a 26-page adventure with 5 maps.

In a secluded corner of the countryside, on top of a hill stands Mount Saint-Mikkel. An ancient power awakened there and since then, the region has been subject to raids by the undead.
You have been assigned to solve the problem…

Baron Solreigh was surprisingly honest when he recruited you: if he offers a pouch of gold to whom will end the troubles that afflicts the mount Saint-Mikkel area, it is because it’s very dangerous.
He has not received news from any of the two groups of men — one of soldiers, the others composed of its five best knights — he successively sent there.
And if he’s going to lose more men, he’d rather they not be his own!
Reports mention an ever-growing troop of the undead swarming the villages around mount Saint-Mikkel — an old priory and pilgrimage destination long declining — leaving only death and ruin in its wake.
Listening to the call of adventure and your lust for gold, your group of Adventurers is on its way through the countryside. After a few quiet days, you can finally see the lonely and age-old silhouette of the priory sitting at the top of the hill through the morning mist…

It is intended for a group of two to six Adventurers from level 4 to 6, for a duration of 3 to 4 hours. 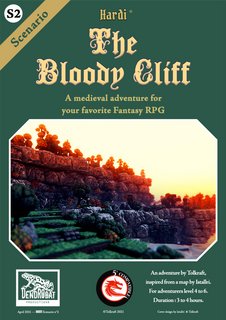 ’The Bloody Cliff’ is a 45-page adventure, which can be played independently, or after the events of Mount Saint-Mikkel. It offers 4 maps, 12 NPC with their portraits.

The sole heir of Baron Solreigh was kidnapped, in the middle of the night, in the heart of the castle! The ransom letter is signed by Masked Harald, a thief, robber and benefactor of the poor. His lair–the Bloody Cliff–is known, but would resist a frontal assault, which would also put the young heir in danger. Bringing the Baron’s son back safe will require a very cunning plan…

The 17-year-old Pawel Solreigh, the only son and heir to the dreaded Baron Solreigh, has disappeared from his room in the middle of the night! In his place the guards found a ransom note demanding, in addition to a large sum of gold, a delirious reduction in the taxes on the barony’s serfs and peasants. It is signed by Masked Harald, the rascal, outlaw and self-proclaimed defender of the people – who justifies his insidious attacks and pernicious raids on the Baron’s tax collectors and convoys by redistributing the riches to the common people.

Harald and his gang undoubtedly hide with their innocent victim in their main lair, the Bloody Cliff; a rocky bar, impregnable by force without endangering the life of the innocent Pawel. But no doubt some brave, astute and courageous Adventurers would be able to find the best way to bring Pawel Solreigh safely back to his father, especially given the handsome reward promised.

You will have to play it smart this time, as many surprises await the valiant Adventurers…

The Bloody Cliff’ is an adventure for any medieval fantasy role-playing games. It is intended for a group of two to six Adventurers from level 4 to 6, for a duration of 3 to 4 hours. It can be played independently, or following the adventure ‘Mount Saint-Mikkel’.

Welcome here my friend, with your beautiful module !

One request: could you use white backgrounds so they are easier to print?

Hi, thank you for your interest and support.

I’d rather offer a PWYW Print-On-Demand version, for two reasons:

I waited a bit for the POD version to ensure there are no mistakes/typo left, and I think we are getting there.

Istallri and I started working on a third (shorter) adventure, in a new series called ‘Detour’ : 2-3 hours of play spread on a few pages.
Stay tuned!