Black Pyramid , Josh “Skull” Dixon’s Zine Quest 2 contribution, is written for the Mothership sci-fi horror roleplaying game. The rear of the zine mentions several inclusions: a backstory, NPCs, maps, random roll tables, inspirational art - all of this is included, and more, including a bestiary at the rear of the booklet. Black Pyramid is well laid out, provides a unique setting for your players to interact with, and contains great artwork that helps build out the environment. Unfortunately, the work suffers from a lack of copyediting and some mechanical misunderstandings. This is unfortunate, as while a typo here and there is not a big deal, the sheer amount of grammatical errors included is unacceptable in a paid product, and pulls the reader right out of the otherwise elaborately constructed world of Black Pyramid.

Look, Feel, and Space Utilization
The zine is a 5.5”x8.5” print that also includes a two-sided 11”x17” color map of a pirate ship and temple. The cover is printed on heavy, matte card stock that picks up fingerprints. The interior is printed on rough, heavy paper and utilizes a white and black, alternating theme. The artwork leveraged also adheres to this theme, which works well, giving Black Pyramid a consistent look and feel. The booklet is staple-bound and, although the cover is heavy, it is also stiff, making it impossible to have the zine lie open flat in the hand or on the table.

The front of the zine is spartan, showing the name, some simple artwork, the author, and what system the module was designed for. The rear has a small blurb about the contents, along with a bullet-point list of what a referee can expect to find inside. It also has the “compatible with” logo for Mothership at the bottom, along with the Zine Quest 2 Kickstarter logo.

The interior covers are printed. The rear shows a 3d10 body-search table with an offset 2d10 random event table. The front has three 1d10 tables: one for random encounters, one for the appearance of an encountered dead body, and one for found artifacts that is actually two separate 1d10 tables, although there isn’t any information on when to leverage one or the other. The opposite side of the front spread is split into two columns, one explaining how to use the module and the other explaining where the idea for the module came from. The center spread has two key reminders of things to do while running the module on the left, and a breakdown of the timing of the module on the right. Overall, the layout is good.

Black Pyramid comes in at $10 USD plus shipping and has 44 pages including covers. All of it is usable content except three pages, the first half page being an ad for locating the author online and the other two and a half a list of Kickstarter backers.

Content
Unfortunately for Black Pyramid, this is where the zine begins to come apart. In examining the interior covers, the first thing most referees would review, the reader is assaulted with grammatical errors. For example: capitalization inconsistencies, spacing mistakes, misplaced punctuation, and poor phrasing. Paging inward a few times reveals the same and more, including incorrect verb forms, misused words, spelling errors, pluralization issues, an asterisk for an unrelated note, repeated sentences, and misordered spreads.

In addition to these grammatical errors, there is an immediately apparent mechanical issue as well. The rear inside cover has a 3d10 table containing items that would be on a found body. An interesting feature of XdX tables is that they produce parabolic results which means that, unlike a standard 1dX table, the purpose of using one is to provide a more consistent result towards the average rather than an even chance across all results. For example, rolling a “3” or a “30” on a 3d10 table almost never happens, while rolling a “15” through “18” happens in nearly a 1 in 3 chance. This is in contrast to a 1d28 table which, while having the same number of results, has the same chance of rolling any of them.

This is not inherently problematic and may even be used in a beneficial way by putting common items, for example small bits of coinage, in the center of the parabola while putting rare items on the edges. But, care must be used in creating these tables; they are not to be used to simply increase the number of results which, unfortunately, seems to be exactly what has happened. In an effort to use only the d10 die, the author has placed what is presumably a joke item, “woman’s underwear,” in the second highest chance slot on his parabolic table. This, combined with the use of a system that doesn’t exist in the Mothership Player’s Guide on a different table (an android “function”), does not inspire confidence in the other mechanics leveraged within the booklet. A referee would be cautioned to make sure to run through the entirety of the module and every statblock within to ensure that all the other systems used adhere to design mechanics in a way that makes sense - something that shouldn’t be their responsibility.

Usability
This is very frustrating, as it’s impossible to trust anything else within Black Pyramid when there’s such glaring errors included. Everything mentioned could have been caught with a thorough copyediting cycle, but it seems that quality assurance wasn’t one of the design factors in the production of this zine. The copy reviewed even had a printing error that wasn’t noticed - a crimped page. While not the author’s fault, it’s just another example of a skipped revision step and another corner cut. It’s a shame, as the contents of the zine and the world crafted in Black Pyramid is very good. The mishaps within are imaginative and gruesome, the descriptions are interesting, and the monsters unique.

Conclusion
Even with a good setting, layout, design, and idea, Black Pyramid suffers from things easily fixed - they just weren’t. In a paid product, printed and shipped to a customer, such things cannot be ignored. If this zine were instead Skull Dixon’s blog, with hastily written and rapidly developed ideas prototyped and put out there for free, this wouldn’t be as big of a deal. Hopefully this zine will be revised and rereleased with the errors removed. Unfortunately, as received, it cannot be recommended. 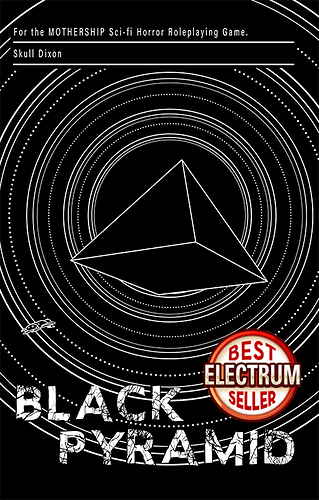 The Black Pyramid; an RPG Zine scenario for the game Mothership by Tuesday Knight Games.   An unknown ultra-black s