It’s more than a bestiary. Centipedes is the definitive supplement out there for any and everything centipedes in the OSR scene. There are some editing mistakes, a few grammatical errors, and some of the bleed and trim settings are off, but, when you look past these superficial flaws, what remains is an incredibly attractive addition to a referee’s library. Everything from centipede statistics to lore-building, Centipedes has it all, and even though the tone can drastically switch from piece to included piece, there’s something endearing about this booklet and, while the content within can be a mix of both gross and downright scary, one has to admit the sheer excellence of the inclusions within.

This booklet, printed in an 8.5”x5.5” format, doesn’t skimp on its page count. It measures in somewhere around 115 pages. The exact number is unknown, as due to either an oversight or improper trim settings, none of the pages are numbered. The cover is adorned with grotesque artwork and the rear has a list of Kickstarter backers that made the book possible. Neither the front, nor rear inside covers have anything printed on them, and the content doesn’t begin until breaking into the book proper. The first items the reader is greeted with is a credits section, followed by a table of contents. As Centipedes is softbound, there is no middle spread.

Paging through the book, it’s immediately apparent that an eye towards detail and aesthetically pleasing layouts was paramount in the design of this product. The tones and styles of the inclusions change from entry to entry, but all are pleasing to look at. Paging through is a pleasing act in and of itself and, while detailed, none of the styling is overcrowded, so the information is easy to parse out and the reader isn’t overwhelmed. Unfortunately, the bleed and trim settings, as mentioned before, are not quite right, so frequently the reader will find areas where text is cut off or difficult to read due to being too close to the binding.

As far as the space utilization goes, calling this book a “zine” is short-selling it. Centipedes is massive, and doesn’t pack things in. There are blank pages at the beginning and end and rather than trying to focus on cramming too much content in two few of pages, this book instead expects the referee to read it, more than likely front to back, at least for the first pass through. Doing so is a rewarding endeavor, and afterwards Centipedes becomes a great reference work.

So, if it’s not just a bestiary, what exactly does this book contain? A lot, actually. It starts with a very handy “Forward” section that describes how Centipedes handles statblocks which, thankfully, is in a system-neutral fashion. For example, rather than giving a flat number for armor class, it’s described in terms such as “plate” or “chain.” That way, regardless of what system the referee is running or whether they’re using descending or ascending AC they’re covered. This forward is followed by a bestiary which includes the Black Centipede, the Scaled Centipede, the Traveling Centipede, the Oracle Centipede, the Translucent Centipede, Our Lord Who Walks on a Hundred Legs, and the Giant Centipede Mount. These creatures vary from the mundane all the way to eldritch abomination. Unique among them is the Translucent Centipede, which enters through the ears and leeches all magical energy coming from the host. If any action is taken to remove the centipede, it severs the host’s brainstem with its bladed tail. Nasty stuff.

Next up are centipede songs, cults, and poems, a ton of centipede-based short fiction, and rules and statistics pertaining to what was covered in said stories. The book then goes back to its bestiary roots, but includes long-form description blocks, more short stories than anything else, and continues on with centipede recipes, playable characters based around centipede mechanics, and even mechanical centipedes. Centipede environs, centipede rituals, and a full-blown dungeon filled with, you guessed it, centipede goodness follows. Centipedes wraps up with a few more centipede statblocks, more pieces of short fiction, a centipede race as class, and a loot table full of centipede-themed items to discover. Needless to say, if the reader is looking for something centipede related, this book has it covered.

The best part of this book is the centipede-based fiction, whether in short story form or as the descriptions in the bestiary entries. Usually books of this type lack world-building or an investment from the reader into the prose, it’s just endless statblocks and short descriptions. The inclusion of the story entries truly brings the reader into the horrifying world the authors have collaborated on building here. Some of them are outstanding; Lovecraft would be proud. If the reader wasn’t creeped out by centipedes before reading the book, they certainly will be once they put it down.

Centipedes excels as a reference work; however, several issues within hinder it in this capacity. For one, the pages aren’t numbered. This is a drastic oversight in a printed work. The best a reader can do is add their own numbers on the pages themselves or on little Post-It tags sticking out the side. Compounding this issue is a numbering error in the Table of Contents, showing a page 66 instead of a 64, but if the reader is making their own page numbers this is easily rectified. Secondly, while the author did have a nice forward in the beginning of the work stating that the statblocks would be system neutral, a few of the entries don’t adhere to this stylistic choice or neglect providing an armor class entirely. There are some unexplained mechanics and a few misaligned pages that are hard to read or have text cut off due to the trim settings utilized.

There are a few more issues caused by a lack of editorial oversight. Multiple authors may have different styles, which is okay, but certain things should be standardized, such as the spelling of “armor,” and there were some grammatical errors and repeated text in various places throughout the book. There are multiple spacing errors, and sometimes the font size was changed not for an aesthetic purpose, but to put more information on a page rather than editing down the prose. There even is a statblock printed out on paper and glued onto the final page, presumably because it was a late addition.

All that said, there’s something captivating about Centipedes. If treated as a book to read rather than as a collection of monsters it shines. The fiction included is an amazing creative choice and allows this book to stand above its peers. Reading the disgusting stories and then seeing the statistics of the terror the reader just witnessed is an effective mechanism that other books should emulate, as it’s truly effective. 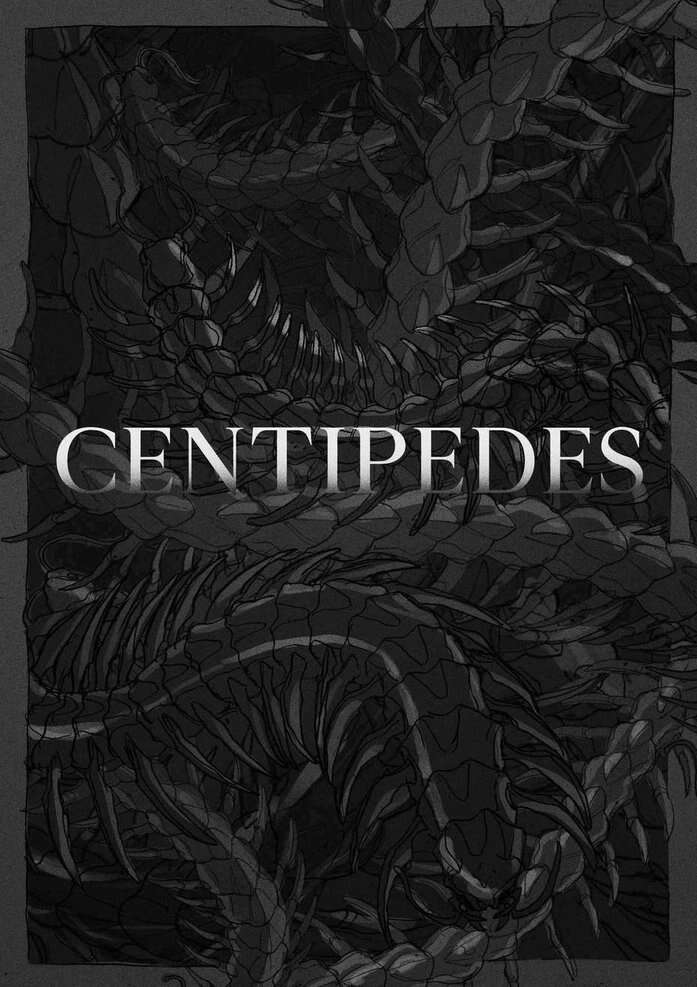 Author was provided a copy of Centipedes in the hope he would review it.

Are they going to re release it with everything fixed that you mentioned?

I’m not sure! It is in PDF so hopefully at least that gets updated.

This was my first ever project, all told I lost something like $1,200 on it. So realistically, Centipedes is probably staying jank.

There is a possibility of some sort of Centipedes 1.5 in the future, but I don’t want to get anyone’s hopes up because it’d be something I did myself for as cheaply as possible, which means it’d take quite a while to get done.

Sorry to hear that! It does look cool and like something I would use for my games. I’m really Interested in the character class.

If that’s what you’re most interested in there’s three or four bits of the zine that apply.

The Human Centipede section has stat blocks for two variations of human centipedes; both a bipedal centipede man and a centipede/man centaur. They’re not set up to be used as player classes, but you might use them to flesh out a centipede man PC.

Then there is the Centipede Centaur Race as Class for LotFP and I’ll be honest and say that it has the least effort of anything I wrote put into it, so it probably won’t blow your mind.

Then there is a section by the amazing Sofinho about intergalactic centipedes that latch onto bipedal hosts’ spines to take control of their bodies that comes with a lateral advancement table similar to Cavegirl’s table for the Wounded Daughters and Wendigo Curse as Class.

If you like, I could email you those relevant bits for the low low price of free. If you dig it, maybe it’ll spur you to purchase the zine in its entirety despite missing page numbers, and if you don’t dig it then you’re not put out.

Thanks for popping into The Pit! I wouldn’t call your zine jank at all, there’s a lot to it that’s awesome and it’s my favorite ZineQuest2 submission thus far!

Just a little rough around the edges

Very generous to offer freebies! Thanks so much on behalf of my friends here, gotta say $6.66 is a good deal for the zine, I hope you make enough sales to at least break even!