Cleric refuses any form of 'non-standard fantasy elements' in the (5e) game, demands Warforged is kicked out

r/rpghorrorstories - Cleric player refuses to accept any form of...

My initial reaction to reading only the title was “Good! F!! Warforged!”

However upon reading the story, the Cleric player is simply a shitty person and seems exactly like the type that would find anything (else) to ruin the game sooner rather than later, even if everything had been done by the “Standard fantasy book”,… whatever that might be. Also, presuming it was super clear that they were playing a 5e D&D game the problem player should have at least known that Warforged existing/being allowed was far from an impossibility.

The GM does bear some -minor- responsibility I would guess, I feel he should have put the brakes on the Cleric player much quicker and most likely should have explained way clearer which races were allowed and to be expected in the world. I personally also do not enjoy having Warforged and a bunch more esoteric races in my games, but for somewhat different reasons than this Cleric dude. Plus, I literally state to every prospective player, in writing, that I am going for a more old school fantasy trope/world and that I only allow Elves, Humans, Halflings, Dwarves and Half-Elves and only the four basic classes.

Good that in the end the real problem was removed.

Everything below is about the same guy. A real Peach that one! xd Anyway, I thought someone else here might get a kick out of it, and it is also fairly thought provoking on managing expectations, dealing with problem players, recognizing red flags and making sure everyone in an RPG group is on the same page in terms of vibe/tropes and edition. 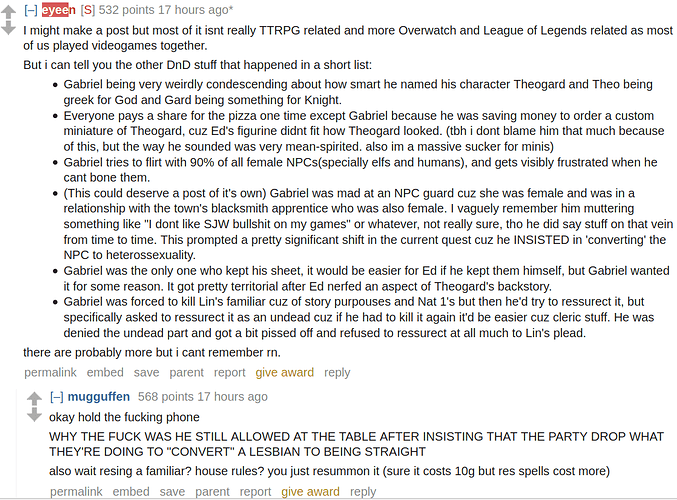