Encounters Balance in OSE and other Retroclones

Since questions about encounter balance in osr ttrpgs are so frequent, I’ve written a blog post about it, with strict reference to the OSE rules, and some advice. 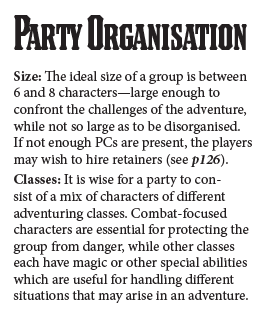 About Balanced Encounters in Old-School Essentials

I’m running an OSE Game and you hit it on the head here. For party with an excellent habit of planning and engaging on their own terms tactically speaking, most enemies can be rolled easily (though I run monsters as bags of HP than smart things most of the time).

A good post! I do think games like OSE have a “balance” to them, even with enemy encounters – it just means something different in the context of what an OSR game’s “play space” is. And you did a great job of exploring what factors B/X has in play to keep every danger in a dungeon from just immediately wiping the party.

Brilliant post, thanks! In my games, the number of players is often 2-3, skewing the intended “balance” quite a bit. It also cuts down the variety of tactical options available to the players.

Having two characters per player seems like good idea. My players are kinda jealous about sharing their xp and gold, so the idea of retainers doesn’t excite them. Maybe I could have the secondary character (their apprentice or whatever) just earn half the xp the main PCs earn without leeching their gold/xp. It would be a little easier game, but then again i could push for more exciting/deadly encounters.

They would probably use the secondary PC as a minesweeper at first, but once it gains levels, it would become part of the party.

Thanks for the appreciation!
I’ve recently run a game where 3 1st level PCs took down a troll… because they knew it was coming to the farm, so they set up a covered pit and filled the bottom with oil!

Those are all neat ideas. An Apprentice of sorts is a great way to also establish a story to the group!