This post is probably not about what you think it’s about, it was just fun to troll

. But it is, loosely, about Final Fantasy. 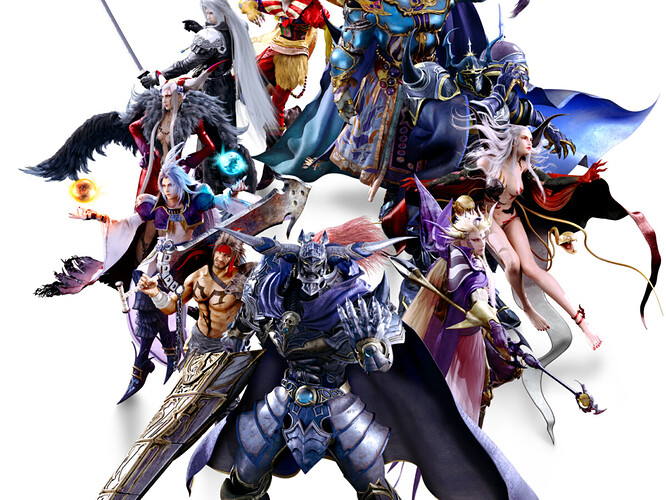 While nearly all of the Final Fantasy games take place in their own universe (or effectively so, even if they’re technically, loosely connected in some way or another), spanning all sorts of genres, from closer to traditional fantasy, to steampunk, cyberpunk, science fantasy, and even off-brand Americana, they have many overlapping elements.

You’ll see recurring character names like Cid and Gilgamesh, or summons like Ramuh and Ifrit, original creatures like Moogles and Chocobos; in some games you see recurring original character classes, or semi-consistent class art design, even some recurring art design for more traditional fantasy monsters.

I tend to do this in my worldbuilding as well, if I build out a world long enough. On my blog Weird & Wonderful Worlds, my first focus was on my science fantasy setting Phantasmos. More recently I’ve been focusing on my setting Maximum Recursion Depth, for which I ran a successfully funded kickstarter campaign. I had already introduced one recurring character name, Doctor Lovesmenot, and I’ve been considering rolling over some other ideas from Phantasmos and possibly some of my other settings into MRD.

I go back and forth, between feeling like it’s creatively lazy, or too self-indulgent, to on the other hand thinking about how Final Fantasy, or Zelda, or Dragon Quest, and many other franchises, all do that too, and that’s part of what makes them endearing. It’s “part of the brand”, and while I could imagine the concern of being too tied to that brand, if I’m ever successful enough for people to be concerned with whether I’m straying too far from my brand, that’s just an entirely different set of problems.

I try not to get too precious with my ideas, something I discussed in a retrospective of my very first blog post, but at the same time, one of the hardest parts of focusing almost singularly on one setting as I’m having to do right now with MRD, is that I hate to abandon all of these other ideas from other settings that I’ve created. I find some comfort in the idea that somehow, all of my settings are connected, and they have these shared threads, and it’s ok if certain characters or names or concepts recur between them, or even if in some cases they contradict and in other cases they’re implied to be continuous. I guess in that way it’s a bit like Lovecraft’s anti-canon, before it got all mucked up as a “mythos”.

In any case, so I think rather than doing it half-way, or feeling a little ashamed for doing it, I’m just going to lean into it and own it, and really double down on the idea that there are going to be recurring elements across my settings, and hope that others see it as part of the charm as well. I haven’t given it too much thought yet beyond Doctor Lovesmenot, Mr. Smiley, and Hopscotch and Honeybee maybe, but I’m excited for what I come up with now that I’ve kicked down this door and accepted this as a thing I’m willing to do. Obviously, I don’t want to go so far that MRD and Phantasmos blur together, let alone some of my other settings, but they’re all different enough that I’m reasonably confident I can do this without that being a concern.

Anyway, what do you all think about “Final Fantasy” Worldbuilding?

I think the idea is interesting and a good move from a creative perspecitve. In my hone games, I often have recurring NPCs from previous games appear to take some of the load of planning and shift it from making Orignal NPCs to focusing on the setting and other aspects that would make it unique.