In the last post, I expressed some desire to run Icewind Dale: Rime of the Frostmaiden.

In an usually quick development, I ran the first session last night. Before I did so, I substantially reworked the introduction to the adventure and the structure of several quests. if you’re looking at running, as at least one other reader is considering, keep an eye on this blog! Today, I’ll show how I reworked the intro quests to be more organic, what I did with a few NPCs, and my rewrite of the Chapter 1 rumor table. 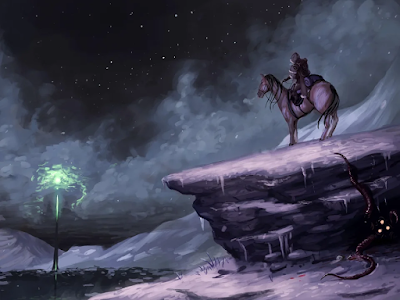 The book advises that the GM use one of the two starting quests, Cold Open or Nature Spirits. They’re wildly different in terms of tone, danger and reward.

I and every other commentator on Rime have observed that it’s better to use both quests together. Their purpose is to give the party a reason to travel all over Ten-Towns, visiting each one and collecting their local quests. Since both quests end essentially at random, it’s better to have two intertwining threads. The contrast in tone is also fun.

The other common comment is that Cold Open should be a proper murder mystery, instead of a kill quest with delays. I’m going to bring this all together.

One of the biggest departures from the module I’ve used is right in the opening. Instead of starting in one of the Ten Towns, I started the party in a sled on the Ten Trail, coming into the Dale. Some party members were Dale natives returning, while others were new to the region.

The party shared the covered sled with a wizard, Dzaan, and his bodyguard, Vetala. If you know the adventure, you see how this is a substantial departure. I’m using Dzaan to replace a couple of the clunkier questgivers in the first chapter, Dannika Graysteel, who gives the Nature Spirits starting quest, and Tali, who gives the Lake Monster quest in Bremen. I still intend to have his execution scene in Easthaven, but now it likely won’t be the party’s first time in that town, and they’ll likely be there to turn in a quest to Dzaan and get a reward. Awkward.

With this, we introduce the Arcane Brotherhood, albeit in disguise, from day one. Also, I like the flavor of Dzaan looking for a live chwinga for much less altruistic reasons, and sending the party on a potentially dangerous quest to investigate the lake monster, while not giving them the magic items he has which, as far as he knows, would make the quest much safer.

(Also, his bodyguard’s name in the book is Krintaas, not Vetala. That’s just an easter egg for the Indian and Tibetan readers I don’t have).

In the intro as I’ve run it, the party gets introduced to Dzaan, get offered the Nature Spirits quest, and then get interrupted. The sled driver calls out about a tinker’s sled up ahead, and instructs the party to get their purses ready if they want to buy supplies.

When they get closer, they find four wolves eating the tinker’s sled dogs, growling at the party. If the wolves are killed or driven away, the party may find that the tinker is also dead. But they weren’t killed by the wolves. The tinker has a deep stab wound through his heart, and each of the sled dogs was killed with a similar weapon. The wolves came later.

The sled is still loaded with supplies, which the sled driver insists on taking if the party doesn’t. But there weren’t enough supplies to take the tinker over the mountains. Why would he be heading south on the Ten Trail if the couldn’t make it over the mountains?

Further investigation would reveal humanoid tracks to and from the sled. One set, with large gaps in the tracks, as if jumping great distances. The tracks lead back to Bryn Shander. The work of our mysterious killer.

The sled driver insists on taking the tinker’s body back to town, showing it to the sheriff and getting the tinker his final rites.

Bury them right
Or else! 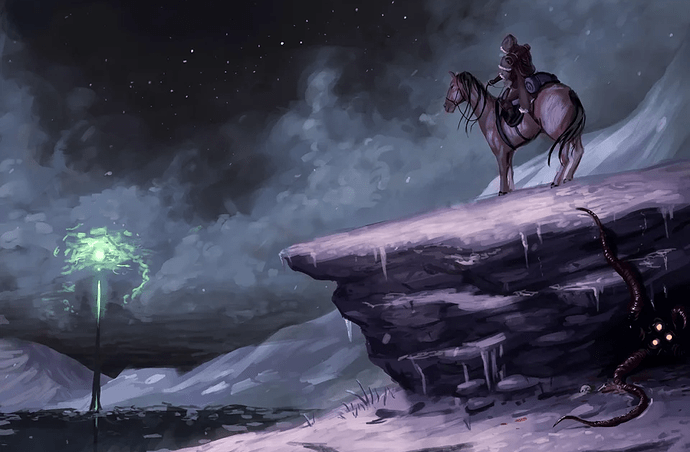 In the last post , I expressed some desire to run Icewind Dale: Rime of the Frostmaiden. In an usually quick development, I ran the first se...

I love these updates, you should keep this thread going as the adventure develops!

I absolutely plan to!