I’m a great fan of Justin Alexander and his remixes of WOTC material (even though I’ve not yet had an opportunity to play any of it). The newest WOTC outing, Rime of the Frostmaiden , looks solid as these things go, and I may just end up running it. Albeit with some changes, and after I’m done with everything else on my plate.

The Alexandrian has already done great work done in that direction, but the parts which most appeal to me in the sandbox approach is the idea of getting to know the Ten-Towns, their inhabitants, and rising to become actual heroes, not just heavily armed hobos. The reputation system promised in Rime would help do that… if it actually existed. That’s something to change.

I’ve just skimmed so far, but one bit I really do find appealing is the conflict in the town of Goodmead. In summary, this town produces lots of honey and mead, exporting it to other towns, but trade has been disrupted by a giant that stole some casks and killed the town leader! In the course of this quest, the party can steal back the mead, with or without killing the giants, gaining the town’s respect and restoring trade. But they also have the option of bolstering their ranks with local soldiers to help them! 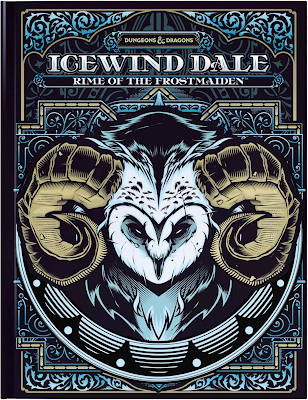 Even better, if they succeed, they can get involved in local politics. The town needs a new leader, and it’s between a popular but corrupt dwarf logger, Shandar, and a well established but reluctant cask maker, Olivessa. But Olivessa doesn’t want the position, so if the PCs want in, she’ll throw her aid behind them.

That’s a great setup. Giant hunt after one attacked your mead hall? Straight Beowulf. Muster the locals to fight the menace. Awesome. Get involved in seedy local politics, demonstrating you’ve really made an impact on the community. Sweet.

The execution is, disappointingly but not unexpectedly, less well done. After dangling an opportunity for local leadership in front of the characters, the module takes steps to nullify it, and makes only a token concession to player freedom. The dwarf used his Zhentarim contacts to stage a scene to make him look like a hero, also it all happens in a cutscene. Sure, the party might be able to ‘expose the deception’ but the module really seems to strain against the idea.

Not in the least because I can’t find any details of the election in the book. The loggers like Shandar, and Olivessa comes from an old family… and that’s it? No mention of how to do an election scene either, despite how flavorful that would be. Does it take place in the meadhall, after every voting town member has abstained from mead for a day to keep their head straight, followed by an orgiastic drinking session? Who votes? Every adult who resides there? Only heads of households? Only those capable of fighting? Only a council of elders? Do the candidates get to cast votes? Is there some kind of anonymity or is everyone supposed to call out their vote before the town? What is the situation like that a small, insular frontier town would consider making their leader an individual who has only just arrived? We need to know dammit! 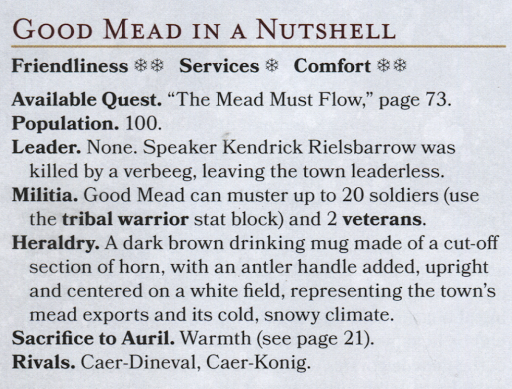 Good Mead is a town of just 101 100 people. Of those, just over a fifth are willing and able to fight in the militia when the time comes. The same seems to hold true for most other towns. You can’t have a population below Dunbar’s number and not have flavorful gossiping and politicking!

And what about mechanics? I’m not asking for a rigorous electoral subsystem, but at least give me something that connects to existing mechanics! Can the candidate’s Charisma score turn the tide? Is their reputation score going to impact their likability?

That’s a whole lot of missing speculation about missing stuff. Here’s how I would run it. 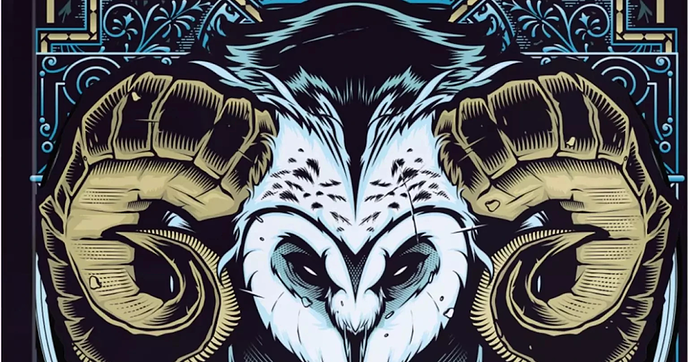 I'm a great fan of Justin Alexander and his remixes of WOTC material (even though I've not yet had an opportunity to play any of it.) The n...

This sounds really cool actually, and a good way to stip material that works well out of the 5e releases.

It’s funny, I’m actually reading a lot of RR Salvatore currently and am almost done with The Crystal Shard so this post is perfect timing for me - roaming around Ten-Towns sounds awesome right now haha!

Reading over your post here and I find the Goodmead Town idea interesting. Could easily be an awesome adventure on it’s own or something you can easily get into in a sandbox module.

I might have to lift this for one of my own campaigns.