Just published this write up of Glaive over at https://perplexingruins.blogspot.com/ 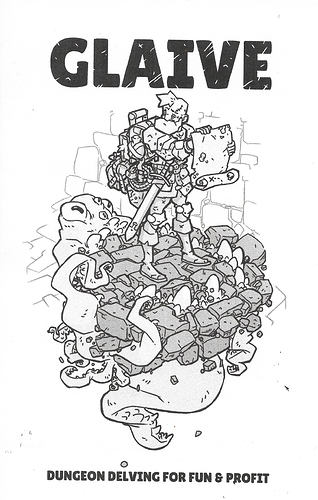 glaive cover1546×2426 812 KB
Glaive is nice to behold. White covers with a well-done whimsical illustration and black title, it appeals with straightforward simplicity. The rear cover is adorned with the Zine Quest logo, nothing else. I printed mine out on sturdy cardstock and bound with two staples, and it just feels good to hold and look at. It eschews artiness for humble punch. Resting on my black table, Glaive says, “yea, you know you want to.” It clocks in at 28 pages of content plus a blank Notes and Character Sheet. The interior covers are blank, and at first pass it seems a missed opportunity for utilized space, and yet it is a continuation of the understated style. Words and art were completed by Scott Wegener and layout was done by Zac Bir and both have done an excellent job here.

The very first section delivers with this no-nonsense approach. Take your 6 abilities: strength, dexterity, constitution, intelligence, wisdom, charisma and distribute six different modifier bonuses however you choose. Make the character you want, it is your hero after all; however, there is a caveat for random 2d6 rolling if you want a random character. I like these flexible rules, in their game opening potential. Next is the significant part of character creation: Talents. Instead of choosing your class in Glaive, you build the character you want to play by selecting two talents. They are thematically grouped by Barbarian, Cleric, Druid, Magic User, Ranger, Rogue, and Warrior. Each of these contain 3 or more specific skills, and here is the best part – you mix and match. Be a berserking forest walker or a nimble rogue with a familiar! Talents are to be swapped in and out like gear. Start with two but when you level up, choose another, up to a max of five talents. If you choose not to swap after five, then increase abilities. Also, if your game allows for other races, you can be Turtlefolk, Elf, Dragonkin or others, all of which have a specific talent or inherent skill. And if you do choose the familiar talent, roll 1d8 to determine this creature. It really just looks fun. Roll numerous d20 tables to get traits, then find trinkets, gear, equipment. All this too much? Simply choose a pre-built character package (then spend your effort selecting two starting talents.) 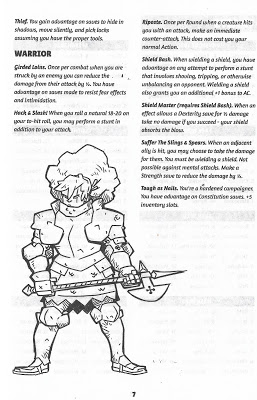 A note on the tables here: There are extensive options for food and animals, buildings, and ships. Though this is flavorful, I am not sure if garlic, herbs, lard, sugar, fruit, bacon, onions all need to be included. Also, prices for chicken, cow, goat, ox, sheep, pig, 2 kinds of dog. Or, 11 different kind of dwellings, or 9 different kinds of ship. These are great worldly details, but the book has no rules for campaigning, hex travel, or even simple tables for generating generic world features. Of course, these can be filled in with other resources, but there are several other indie zine-sized games I’ve seen recently where these travel, world-building components are included. Especially as a solitaire player, that is the kind of material I really want in a condensed package. I can make up garlic and onions, but tables of features, hooks, NPCs etc. are where the “meat” is.

Saving throws are d20 equal or over. Advantage or disadvantage available. Inventory is 10 + CON bonus. Rules for Turns, Encounters, Reactions all there. Movement is abstract – I like this, I have little interest in math and measuring. For those seeking more tactical combat, rules can easily be dropped in. Glaive uses Usage Die for tracking certain items. Initiative uses d6, high goes first (a great rule in my opinion and is my current standard no matter the system, if not done narratively). Includes the Shields Broken rule and utilizes stunts.

Glaive has a nice carousing/upkeep chart that offers some different ideas to generate new adventures. There are six options that could just be used in succession within a larger campaign to generate side quests.

Magic is a spell book system. The PC needs to be holding a particular book in order to cast that spell, and those books take up room in the precious inventory. The book comes with a list of 100 spells and mentions that spells from other old-school games can be used. There are also provisions to allow for casters to be more dynamic than healer or fireball maestro – offensive and healing magic can be extracted from any spell books as raw energy. This is a cool feature meaning in a pinch a caster can still contribute if a situation becomes crucial. Because the spell books are the source of magic, I think this can present some interesting party dialogue when adventuring. In the dungeon, they come across a rare book, and since everyone can equally be a caster, deciding who gets said book may present some challenging conversations.

The final section of the book is “Monsters.” There is no bestiary here, but a section describing how monsters from any old-school system should work, with some descriptions on stats and their meanings. This is great in the spirit of the game’s overall flexibility, but it does mean you need to go get another resource if monster combat will be part of your playing experience. This really should not be a problem, there are numerous tools out there to find monsters for a game of Glaive.

There is however a “monster builder” section with three methods: 1) Just Use Bears 2) Give Them Talents 3) Make Them Weird. This third is pretty fun, it offers several features to generate a “big threat monster” to use in the game. Recommended skills like Magic Siphon and Minions are offered. These options allow the GM to really pull and customize a vast array of monster options to fill out the game.

Glaive is a great little book. It presents well, content navigation is cleanly laid out and Wegener’s illustrations are consistent, light-hearted, and deployed well throughout the text. The writing is clean and relatively robust for games of adventuring. I really appreciate the flexibility and diversity utilizing the Knave system of “your inventory is your character” while also including a fairly deep (though not in-the-weeds) talents mechanic, which allows parties to be slimmed down and grow into some fun variety. The spell book inventory is another cool system that further increases inclusion and customization. 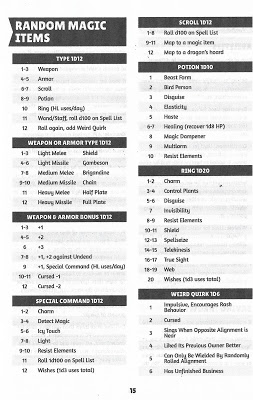 Some Things I Would Have Liked

I believe Glaive would not have suffered with the inclusion of more narrative-driving content. With this clean layout, three to four more pages of hooks or interesting feature generators would have been welcome. This can go either way though because being without this content allows for the GM to customize the world by pulling monsters they prefer and using any published adventures or references for world building. This is why I have come to appreciate games that utilize deeper narrative components in character creation. In Glaive players can roll on background and trait tables, one-word descriptors in which to generate direction are nice, but this is also a space for games to really deepen the quirkiness in character backstory and motivations. I also like the idea of one page of world movement rules and some world/ hex development tables.

This is a good system at a great price. It offers the light rules common among indie osr games but dares to add the Talent system for wider customization. Of course, with too many extra generating tables this could just be Black Hack Lite. Its appeal is the small rulebook while including talents. It is up to players to decide on system-reference-table ratio, but Glaive is certainly a good place to start while benefiting from enough depth to support long-time play.

Glaive can be found here: https://tesladyne.itch.io/glaive

Great review! The talents system sounds very intriguing. How many talents would you say there are in total? Also I saw you mentioned that there’s a magic-user “class”. How does the Magic-User interact with Knave’s spellbook system (since everybody can cast spells?

Thanks for reading! The talents are fun - there are 40 (!) to choose from, allowing for some real dynamic characters. - But only allowing max of 5 at any given time, adds a real choice component. Magic users have interesting spell based abilities (beyond the ability to have a familiar) such as wielding weapon while casting, better magic defense (Spell eater) , spell retention - or Eldritch Feast - which allows you to cast raw magic essence without using a book/slot.