Less Rules To Do More

Less Rules To Do More

Hanging out on forums, game design communities, discord servers and the like I come across a lot of people trying to hack games, old school D&D in particular to do more than what it currently d…

Over the past two years I’ve been running more and more games in the style of pre-D&D games, FKR, “Arnesonian”, etc.

In the above blog post I am trying to make an argument for reducing the rules around things important for your game before you go about adding more mechanics.

Let me know what you think!

I agree with your conclusions. I’ve noticed with my own players that if one of them has a skill or feat allowing them to do someone, the others will act as though it’s forbidden for them. It’s deeply ingrained. If I tell them that anyone can try the thing, they usually won’t unless the thing-specialist is with them.

I’m constantly championing the use of the narrative/negotiation to accomplish the things you talk about as well. I think that a lot of people fail to see the sheer possibilities and beauty inherent in the more abstract combat systems.

Verisimilitude in systems always comes with a price (most often we pay this in speed of resolution…perhaps my preference is just for quicker combats), and the point you make about players “living in their character sheets” is one I bring up often as well. Rules can take a player “out of the game” and lead to decision making based on system or even decision paralysis. When the rules are telegraphing “what is and isn’t possible” or “the odds of something succeeding” it can inform the player’s strategy in a negative way.

I love me a short rulebook. Anything longer than ~30 pages and I start sweating at the thought of having to read and absorb it.

Upon playing through a heartbreaker with family, friends and random internet people, I’ve found it increasingly worthwhile to prune away excessive detail particularly in equipment lists. Saves having to explain what exactly the difference is between banded mail and splint mail is, and I’ve not met many outside of nerd circles who know what brigandine armour is.

I’ve just had a look at how the weapons have changed over the iterations:

version 0.14, doing away with specific names and going for flexible categories instead 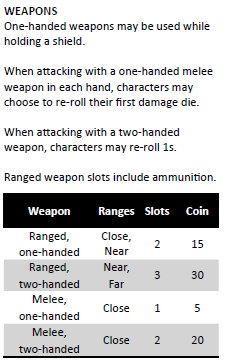 version 0.21, realising that you probably don’t need to worry about ranges when the categories themselves are named ‘ranged’ or ‘melee’, and it makes space for examples

Suddenly the in-laws, who are enthusiastic geeky boardgamers but not all that au fait with fantasy vocab, had a solid grasp of what these weapons are and do. And less time has been spent trying to work out the ‘perfect’ weapon, and fewer occasions of people wanting to play axe-wielding berserkers but picking hammers instead because they’re more optimal.

Off White Cube rules! Exactly my kind of game.

They joy of the OSR spirit - take a game you quite like, strip away anything you don’t like and render the game barely recognisable to end up with something just the way you want to play (and / or run).

It reminds me of that phrase by Antoine de Saint-Exupery

Prof. Dungeonmaster was saying something about how more rules constrict freedom. And Knock! magazine had a whole articcle about how the Thief class discouraged stealth and disarming traps among non-thieves. Youre all dungeon plunderers. Youre all thieves!
Id rather get rid of all classes and just sprinkle rings, wands, scrolls and tomes in the dungeon. Tomes bind with some readers and not others. Roll for affinity.

The episode of Dungeoncraft Im mentioning is the most recent at the time of this post about Cinematic Advantage as a replacement for flanking. Its a way of encouraging the kind of dynamic combat moves DCC already calls Mighty Acts.
Anyone should feel free to leap onto foes, jump on a table and kick someone in the face, flip a brazier into the room.

This is the design philosophy of WHITEFRANK, which is inspired by the original Minnesota Sessions. Anyone can try anything and in some situations characters have to “roll on X” - with X being something not everyone has meaning some characters have an abysmal chance of success. But going with this is a very differen philosophical approach. No pope of the gaming table DM / GM, no “my word is law”. “Players telling a story” is the phrase I use. The story is everything. Not, as in, a story set in stone and everything has to kowtow to it but, the shared experience IS the story, and it should always be fun, even when it is a serious story or a high stakes adventure story.

So many problems- really, almost all problems, arising from trying to play tabletop RPGs come from the rules being restrictive of certain in-game activities. That goes beyond flavour of a game into the realm of papal infallibility and imposing a wargame mentality on to a role-playing game. Not good.

What does Arnesonian mean as it applies to game design?

"Blackmoor was created as a response to historical war gaming. Dave Arneson and his friends were frustrated that many war gaming sessions ended in rules discussions or discussions about what was historically accurate. That is why he chose to create what he called a “fantasy setting”. He did not want any restrictions that could get in the way of having fun and allowing the game to be played.

For the players, I think part of the fun was that they didn’t know what could happen or what to expect.

Im familiar with Gygaxian Prose and Gygaxian Democracy. Arnesonian is not an adjective that gets as much use. Is that where you roll a die and I tell you if you succeed?