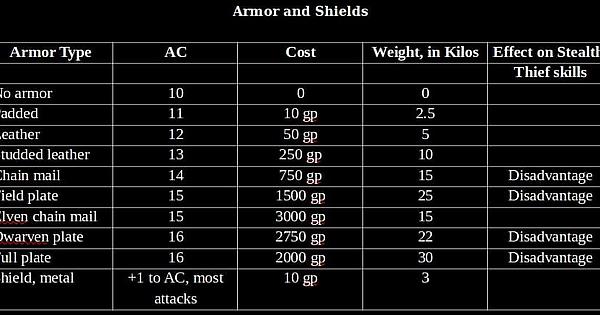 EDIT: I messed up, changed Elven Chain to weigh 12 Kilos instead of 15.

I made the table above based on various editions of DnD as well as non DnD tables, I felt most armor tables were too! granular or not granular enough, the costs did not follow a very logical progression/value and above all Armor / AC values seemed really OP, like too high and as such too much of a killer feature. By that I mean it wouldn’t be too hard/long to get the gold and after that your fairly low level PC would almost never get hit by half of all common monsters, even if the monster tried attacking the player 3 or 4 or more times in one single combat. Simply put if you can get to AC 8 with just saving up gold or finding/buying nice armor, and then you add a Dex AC bonus of maybe +2 on top, and maybe a AC bonus buff +1 due to a spell by a friend, your 1 to 3rd level not even rich character is now at AC 21,… Which means that an average Orc, Gnoll, Kobold, wild animal etc etc, will almost never successfully land any hit, hence my table and values.

I like my battles, fast, furious and fairly deadly (in theory) since I like OSR, tbh in practice my ACs above likely don’t even necessarily mean that my game is more deadly or not much, only faster. (Battle is decided faster, characters decide if they have to run away or can prevail, faster). By that I mean is that all the ACs above are balanced/scaled!

So any NPCs or monsters they encounter that have Armor of the same type, will of course have the same AC! Consequently those NPCs are no less and no more hiteable than the PCs… I have also scaled natural armor of creatures and monsters to match my scale of +1 to ca +6, in other words it will be very rare that my players encounter a monster or adversary that has any AC bonus that is higher than that I have in the table, so also ranging from +1 to +6. This holds true, barring very magical or legendary beasts, which my players likely will only encounter once they are higher level and have big magical (AC) bonuses themselves.

I don’t find drawing out combat up to twice as long, with ca. 2x as many misses to really have much added value. The monsters will die / get hit faster too! with my AC system, so the net result is not that different and certainly not a death wish.

I spend some time reading the Chain mail and Plate mail (both were historically very expensive/valued even in the real world with our bit more advanced technology at the time) Wikipedia pages, to make sure my cost per type as well as the weights were sensible.

Wizards and Clerics can only wear/cast spells with armors that have ACs up to 14, (unless they are magical +1 or +2 versions of those base 14 and under AC armors, Elven chain mail likely will also work as almost Elven chain is magical to some degree, it is made to not interfere with spell casting). Thieves, in theory, can wear any armor if they have high enough STR but as the table shows it will be bad for their primary class skills = disadvantage on (almost) all their Thief skill rolls and Backstab / dexterity based attacks.

Elven chain is fantastically rare, takes a looong time to make and almost never sold, only earned or gifted, Dwarven plate is also very rare, but can be had if you have the coin and can find one of the very few Dwarven master armorers capable and willing to make it in non-dwarf sizes, and also takes a looong time to make. Special processes only a handful of craftsman know, zealously guarded metallurgic secrets and additives, and reputedly rare magic are used in these rarest of armors.

I purposefully didn’t want to go the way of having certain pieces (chest plate of instance) of armor in the table/making a very long table, I figure a DM can always assign those values on the fly, based on type, fit, condition etc, and by looking at this table it should give him a (very) good starting point for those situations and ACs any way

Anything you would do different?

If I look at my table as a Min Maxer Munchkin, i’d think to myself:

This is why shields are nowhere near as good as armor covering entire body,… breath weapon, acid splash, magical effect, arrows fired into melee, all of those and more might still (partially) hit you if you only have a shield and/or padded armor (under or over the shield, shield not up in time, eats through soft armor too easily) but how do I rule that without more hassle and die rolls…? Not sure at all…!

Thanks for this!! This is really handy

Anything you would do different?

I don’t know which game suggests this, but I personally like assigning broad armor types as even AC (e.g. 12, 14, 16) while keeping shields as +1 AC. I like the effect that equipping a shield makes the AC odd, it makes it easier for me to bookkeep in my brain.

Haven’t had a chance to try it yet, but I also like the zero-based ascending AC that Whitehack has! Feels so intuitive in a way I’m surprised wasn’t done from the very beginning of D&D. Why not treat THAC0 (now ‘attack value’) as the important thing, and AC as the detractor?

Yes I remember that sort of thing. Like whatever armor gives you AC 10, plus shield makes it sort of 10.5 (or 11) then up to the next type of armor, and so on.

I took a different approach with WHITEFRANK because I always preferred the granularity of RuneQuest and some others where armor wears away and where there are a few more special rules eg arrowproof armor, parrying with a shield and so on.

It’s definitely possible to reduce armor rules to one page or less though, no question. I think it’s a balance between flavor and rules.

Interesting about the broad/even armor types, had never though of that.

I’ve looked at White Hack. Had another look, also at this explanation online on how attacks and especially AC / AV work:

That did my head/confused hell out of my tbh! xd But it could well be because of lack of familiarity/forming too much of a habit playing with the “AC = 10 to 20 (generally speaking) and you roll a D20 and add some bonuses” thing. After all there was a time I found Thac0 perfeclty good and logical, so perhaps I could get used to the Whitehack system too.

WHITEFRANK: 12 or more to hit the target. Does it do damage? Separate question (armor, toughness, parry, dodge, evasion)

Other approach: to hit means CHANCE OF DOING DAMAGE. Attacks might be physically striking a target but not doing damage. AC definitely fits this approach much better. The more detail, the less abstract, the further away from “chance of doing damage”. But D&D had an unresolved conflict when it added elaborations to the original wargame “chance of doing damage” approach.

That explanation feels pretty verbose to me! I would get confused too

The way I think about it is that by default, a player has a 10-in-20 chance to hit someone (this is AV), and AC subtracts from this chance. The main quirk is that instead of literally subtracting, like the explanation describes, Whitehack asks you to also roll > AC when you roll your X-in-20 chance to-hit (AV).

But for sure, I feel like d20 + modifier >= some target is the most wide spread way of doing things, and it was the best choice for your AC chart!

Other approach: to hit means CHANCE OF DOING DAMAGE. Attacks might be physically striking a target but not doing damage. AC definitely fits this approach much better. The more detail, the less abstract, the further away from “chance of doing damage”. But D&D had an unresolved conflict when it added elaborations to the original wargame “chance of doing damage” approach.

Yeah, I think it’s interesting how AC became a one-size-fits-all sort of situation by wrapping up all factors of to-hit into a matter of armor. Experimenting now to see if there’s a way to define to-hit as a matter of dodging/missing, and armor as reductive against damage. I don’t think it’s an uncommon ‘hack’, but haven’t looked for rules for it in a while.

Many years ago I expanded out the “Rogue” (Thief) Special Abilities to a d100 chart where a player could randomize a set of Special Abilities instead of always having the same ones like Hide in Shadows etc.
Then I expanded it to standard Special Abilities by class. Part of that was to add Parry With Weapon, Parry With Shield, Enhance Armor and so on, as FIGHTER type Special Abilities, and so on for Rangers, Paladins.
That allows the same simple AC system but to add for SOME characters the possibility of another roll to negate the effects of a successful hit.
It worked perfectly well, it was the arrival of 3e that ruined it because people abandoned the expanded 2e too much to make persisting with the rules have any point.