Removing Clerics from your game

I am toying around with different ways to work magic (you know, the old “Vancian Magic sucks!”) in a upcoming OSE game. I like the ‘idea’ of freeform magic but in my experience this becomes difficult to manage and takes up additional time at the table. So, I have been looking at various other systems and seeing how they handle magic. This lead me to Beyond the Wall. BtW removes clerics completely from the game and only has the Mage class that can cast magic. (Please no suggestions for alternate magic systems, that isn’t what I am discussing.)

Given my almost 40 years of gaming experience I feel the cleric is one of the integral aspects of the game. A solid party has a fighter, magic-user, thief, and cleric. A cleric’s ability to heal feels almost mandatory to the game. I have not played BtW, but I was curious what others thought about this. In BtW, some of the typical cleric spells are converted over to a mage spell so I think the loss of a cleric’s healing ability might be overlooked.

I find the idea of removing a cleric from the party (and player choice) and turning them into sage-like religious people that PCs could approach for diabolical information, perhaps religious favor, political machinations, and things like holy water, could be an interesting element of the game.

I guess what I am asking is: When you played BtW, did your party feel wrong without a cleric? Was it not missed? How did not having a cleric in the party affect undead(!) encounters?

I guess what I am asking is: When you played BtW, did your party feel wrong without a cleric? Was it not missed? How did not having a cleric in the party affect undead(!) encounters?

I haven’t played BtW (yet) but I have been playing without Clerics for long time, sometimes due to the lack of the Cleric in the rules, sometimes because nobody wanted to play one. I’ve been doing it across different systems, and groups and have seen a lot of different way to handle what it does mean, but there are two things that always emerge (and that I work on both as a player and a GM):

I’ve run several games without a canonical Cleric Class (including BtW). We didn’t miss it.

I’ve always felt that the Cleric Class was rooted in rather weak archetypes when compared to Fighter and Magic User (and what archetypes there are, are predominantly manufactured by the Game itself tbh…the need for a Van Helsing type to defeat “Sir Fang” was mostly generated by play…other than that…maybe Bishop Odo?). Definitely not as rich in the Appendix N/storytelling we typically draw from to imagine fantasy worlds.

One thing to consider is to add some Herbs & Plants to address injury without the use of magic. I have a handy generator for these here: Herb & Plant Generator.. As far as reduced access to Turning, I think that’s just a good way to make Undead much scarier, and that can be a boon for emulating certain types of genres

One thing to consider is to add some Herbs & Plants to address injury without the use of magic. I have a handy generator for these here: Herb & Plant Generator

That’s basically what I do - didn’t have a generator though. Thanks for the link!

Oh nice, that is quite sexy! Thanks for the link!

I actually really like the Cleric class. Since I only play with Fighter, Thief, Cleric and Wizard classes, the Cleric is the catch- all term for priest, monk, druid etc subclasses/archetypes. Just the other day I saw Prof DM’s vid in which he says that DnD essentially invented the Cleric archetype within the modern ish fantasy realm, nonetheless I like the archetype a lot.

It gives a ton of opportunity to have Gods, faith, a pantheon and more roleplaying moments in the party. It also works exceedingly well with “Name of the Rose” or Undead/Zombie/Lycanthropy tropes. I do feel that Clerics can quickly become a healing machine and waaay too overpowered, I am thinking about ways of limiting the healing ability and spells severely of Clerics, both in terms how often a Cleric can heal at all as well as how many HP a cleric can heal. Furthermore I don’t allow them to wear armor over AC 14 without severely affecting their magic and they always do less melee dmg than the fighter as well as use d6 for hit points.

For me it is all a matter of balance. If the 4 classes feel very balanced in power level and all useful in their own unique ways without becoming a “spamming machine” of any of the abilities that are unique to them/they excel at, I think it is fun to have all 4 included.

In my sessions, some of the funniest or most unexpected moments (Clerics being all preachy or judgy or like a Jehovah’s witness, or feeling the need to help the weak or build a temple) or the most roleplaying heavy moments were often due to players playing their Cleric characters well. Like usual, I like what Prof DM has to say on the subject, even though he is very harsh hehe, more than I intend to be: 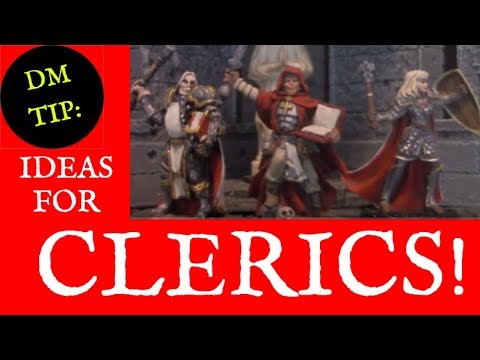 Having said all that, if no player expresses interest in playing a Cleric nor in religion, there is no reason to worry about them. In that case they could become interesting antagonists, a roleplaying element in the world, an NPC they have to pay or do favours for to get healing potions etc.

Whoa. That video is quite interesting, especially his views on the restrictions of the class. I would love for a cleric to say he would not heal a party member because they did not follow the same god, or even declare that he would not continue adventuring because it is the sabbath day.

Yeh glad to help/link! Prof DM goes really far, but I like the cut of his jib, it seems like everything he puts in place is motivated by wanting his roleplayers to roleplay (including their class) as much as possible and also be challenged to think constantly rather than relying on just spamming class skills.

To harken back to the idea of having more healing potions or restorative herbs available in your world, the problem with those that I see is that pretty soon, as a GM, you will have no or little control over them. Unlike spells, especially if you use a magic system such as Prof Gm proposes with no fixed spell slots and simply spell rolls with significant chances of a failure or the 5% chance of disastrous critical misses any time a spell is cast.

I have noticed that whenever I make healing potions (or any magic items or any flammable oils or healing herbs) available, the Skyrim instinct kicks in. By that I mean that players start hoarding these things or trying to figure out exactly how to get them for free or as cheap as possible. The thing is, if your 1st level players have no Cleric and rely on magical potions or herbs and those are fairly easy to acquire and cost somewhere between 10 and 50GP, or even 200GP, that does not appear too much of a problem. Until they reach 4th and collectively have 2000+ GP and are finding at least an additional 100 GP every session. At that point almost any player will be like “Alright! Let’s buy 10 or 30 of those potions or a whole bundle! of those herbs”. They would be crazy not to, because having plenty of healing potions is the most likely thing that will instantly and dramatically increase their chances of survival, more so than anything else.

If the GM at that point says,… “Yeh sorry, they are now suddenly very scarce and cost four times as much” the players will feel gipped, rightfully so.

I think healing from any magical or insmeans should be minimal and very limited. If you do go the potion or herb route, same thing, potions or any ingredient that instantly heal should be extremely expensive and rare from the get go (if they are available for sale at all) and remain that way indefinitely. Instead I think rewarding the players with a potion when they delve into dark and scary places is better, because it gives you control of how much healing they have access to and also gives the players motivation and a sense of accomplishment rather than “we are just buying some of this stuff, now we can extend battles super long, take mondo damage and just chug healing juice”.

Another thing which helps is that I only allow each player to do 1! single thing per 6 second combat round. I wouldn’t allow a player to grab (even if it is on their belt), unstopper and chug a potion and get the healing from it, as well! as doing an attack in that same round. It will take the entire round to get their health back. They can attack the next round. Or, if they really wanted to do both, it could very, very rarely happen but the DC would be very hard, so it would be a heroic and cinematic move.

I only allow each player to do 1! single thing per 6 second combat round

That sounds fairly reasonable, and also:
“Drinking a potion takes one round” (B48)

As for the rest of your post, I think the availability of items should generally be established from the beginning, for instance by using a Market Type system (like in ACKS) or something along the lines of Brendan’s proposition. In my Dwimmermount, when we use splintering shields (well, actually helmets), we employed a rule that said after each purchase of a given item there was a 1-in-6 chance that no more was available.

Even though clerics are always in D&D I am surprised at the assumption that parties always have one because in my experience many party members go with the more obvious classes. This leads me to suggest that if you nearly always have one then not having one will be interesting regardless of system.