Find the review at https://perplexingruins.blogspot.com/

An Adventure Game inspired by the likes of Into the Odd & Knave. Explore a mysterious woodland filled with all manner of creatures fae and fell. Pillage ancient barrows, steal powerful spellbooks, and slay horrid beasts. 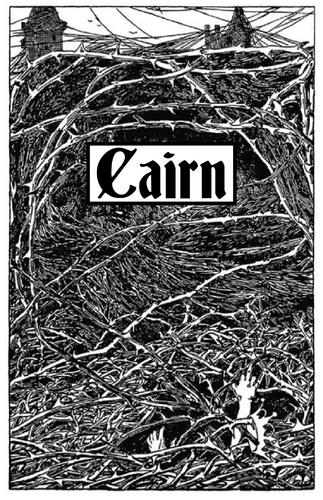 This rear panel text highlights wonderfully the full front panel art by German artist Wilhelm Jordan. A wild vortex of thorny vines engulfs barely discernible hands and obscures all but the upper reaches of a village – someone of royalty in distress, says the quaint crown also being submerged. What a great piece! Could even be your first hook – go investigate the clearly magical disappearance of the regional scion. Coupled with the contrasting title box, Cosmic Orrery has created a striking cover composition.

Yochai Gal’s Cairn is a lean system that offers the direct simplicity of Into the Odd’s combat and the inventory-based spell system of Knave. It also uses a tactile inventory system seen in games like Mausritter in which printed out “cards” are actually placed in appropriate slots.

It can be a deadly game with only 1d6 starting Hit Protection and direct damage combat instead of “roll-to-hit.” It does utilize Armor Score, a defense attribute on armor which is subtracted from incoming damage; I really like these kind of straightforward combat mechanics. Battle can be messy, almost always damaging, but acquiring armor feels like a truly valuable proposition. However, the balance of wearing armor in your few available inventory slots, coupled with either a weapon or spellbook is fun and gamey , tactical. These components put creative problem solving always front and center for the player. It makes for quick and nimble play where narration between players and the Warden can be fluid and always evolving.

Upon opening the front cover, the reader is met with brief text of credits and influences, followed by eight summarizing points of game play: Choice, Death, No Classes, Objectives, Principles, Growth, Neutrality, Difficulty. This is followed by a full page of Warden specific “Principles” and continues onto a page of “Principles” for players. Wide spanning advice such as on offer here is great for those new to gaming. It can help get mindsets around some of the core ideas as to how tabletop roleplaying can be approached. Experienced gamers may find three pages (out of nineteen) containing advice a little much, but it is certainly well intended and indicative of the indie gaming movement’s openness to new members!

3d6 across Strength, Dexterity, and Willpower gets your character going. Followed by numerous Trait & Background & Gear tables, character creation is quick and streamlined, even to the point of including numerous Pre-made packages. Characters are defined by what they carry but the premade options are labeled as specific classes and races to help players that want a particular kind of style. It is a thoughtful design choice with inclusivity and ease in mind. I really like the sheer number of tools and gear available. Whereas in previous reviews I disparaged some extensive lists, these items feel very useable, applicable to the business of common play. They are pertinent to the character right out the gate in a very ground level way. A list of 100 spellbooks is available for those characters that roll this option from the bonus item table. 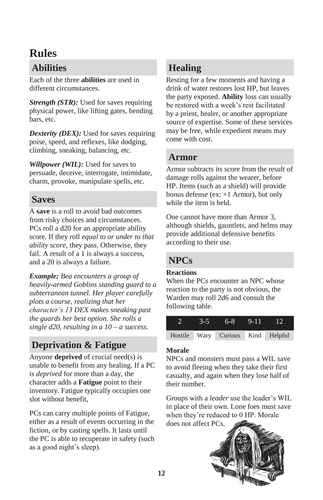 This is a d20 equal or under system. Cairn includes rules for Fatigue, Healing, Armor, Hirelings, and Relics.

Which leads me to make a note on the included sheets. The zine is nicely laid out with sparingly used but good public domain art. The character sheets are hand drawn in a different style and it jars with the overall aesthetic. The sheet of inventory icons is useful, but as a unique feature that draws attention to itself, I would prefer cleaner drawings, and not have the 2-slot icons divided by a line. Now this is absolutely subjective, and some players will find the character sheet and item art more than adequate. Cosmic Orrery’s creative contributions are serviceable, gritty, and appealing in their simplicity and small size; they tap into an old school sensibility widely appreciated. However, there does not appear to be icons for Fatigue. As a major part of inventory, this seems to be an oversight, or I have misunderstood. The icon sheet has a number of blanks for players to write or draw their other items such as tools on, so maybe writing “fatigue” on these is a fine solution. Beyond this, there are “spellbook” icons to place in inventory slots, but they are unlabeled and without room to write. The CHAR SHEET has a notes section on the reverse side to notate what spell you have, but it means flipping over to read, erase, etc. Though novel, this kind of system risks becoming frustrating with all the little cutouts of paper. I will need a little pocket or something to carry my game pieces in. This is not only with Cairn, but other games that rely on these kinds of print-and-play components. Digitally, such inventory management is fun, like Tetris, but on the table, all these one-inch icons risk falling all over the place. As a solitaire player who sometimes manages 3 – 4 PCs, shuffling all that paper around looms as tedious. I recommend laminating the icons sheet for durability, heft, and dry erase capability. **** I have not played Cairn or Mausritter yet, so such statements regarding practical application deserves to be taken lightly ****

There is a section on Relics. These are items containing a single spell. A few examples are given but there is no list of “relics.” I really like this feature. Make your own item using the included spells or some other element you and the Warden discuss. A game like Artefact comes to mind. Start a session with your Artefact generated item and incorporate it into your Cairn campaign.

These are pretty straightforward rules, again to facilitate ease and swift play. Easy rules for retreat (DEX save and safe location); attacking is simple damage roll; attacks can be impaired or enhanced; there is also a “Scars” table for 0 Hit Protection. Combat is fairly simple, and I suspect narration will be just as important as mechanics. With the many rules-lite/ narrative based play, Cairn sits nicely between the two, offering players a little of each style.

Cairn comes with a small list of six monsters to get started with; they are fleshed out enough with full stats and several details to plug them into a variety of settings. There is a small Creating Monsters section to allow the Warden to easily populate the world. With a clean and simple template, this can be done on the fly, though some OSR conversion principles are included. Generally, it recommends 1 HP per HD, which is a quick way to proceed. Cairn also has Wardens ask a few questions to help facilitate the conversion and port over more dynamic creatures. 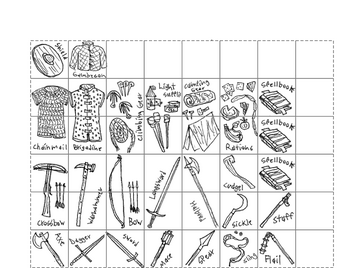 The book ends with a list of 100 spells, a list quite similar to other Knave-based systems. You’ll find within:

Anyone can cast a spell in Cairn, as long as they hold the book in two hands. This means that as long as there is room in one’s inventory (1 slot) a spell can be part of a player’s arsenal. Carry a sword and a found tome from a dungeon and you are a dynamic force. The caveat being each time a spell is cast, you add 1 Fatigue to the inventory. This will require players to do some feeling around before striking the balance between caster and basher and looter! Good stuff here. Yes, consideration is necessary for efficient play, but players need not feel stuck in any particular role.

All together, I really like Cairn. It is agile, easy, and maintains enough volume to support longer play sessions. It is slim and lacks much generative content, but for the generous price of free or donation, you really can’t go wrong. Grab your favorite resource materials and construct a dark woodland world to deploy these characters into. I am on the fence with the inventory system. I appreciate the idea of the physicality, but I think it could become more trouble than it is worth. That being said, simply write the item into the blank slots and forego the cutouts, no big deal. Additionally, there is a window of potential fun in creating your own little inventory icons specific to your game! The main issue for players is to decide on the d20 roll under or d20 + modifier roll over system. Do you prefer quick deadly combat, or more traditional AC/try to hit combat? Cairn takes the traditional fantasy setting of Knave and adds the Into the Odd system. I think if someone is looking to get into simple fantasy gaming, Cairn is a fun and affordable way to do it, and if your table wants to truly explore character backgrounds and relics, than it has serious potential for deeper play. Cairn is a generous offering to the osr/indie gaming scene, and is easily hacked for personal modifications. Flexibility is the name of the game. And yes, the well-chosen cover art is great.

*The game has been updated with a One-Page character sheet. Keep an eye on the game’s page (link below) for more updates