The Hole in the Oak - Old-School Essentials Review 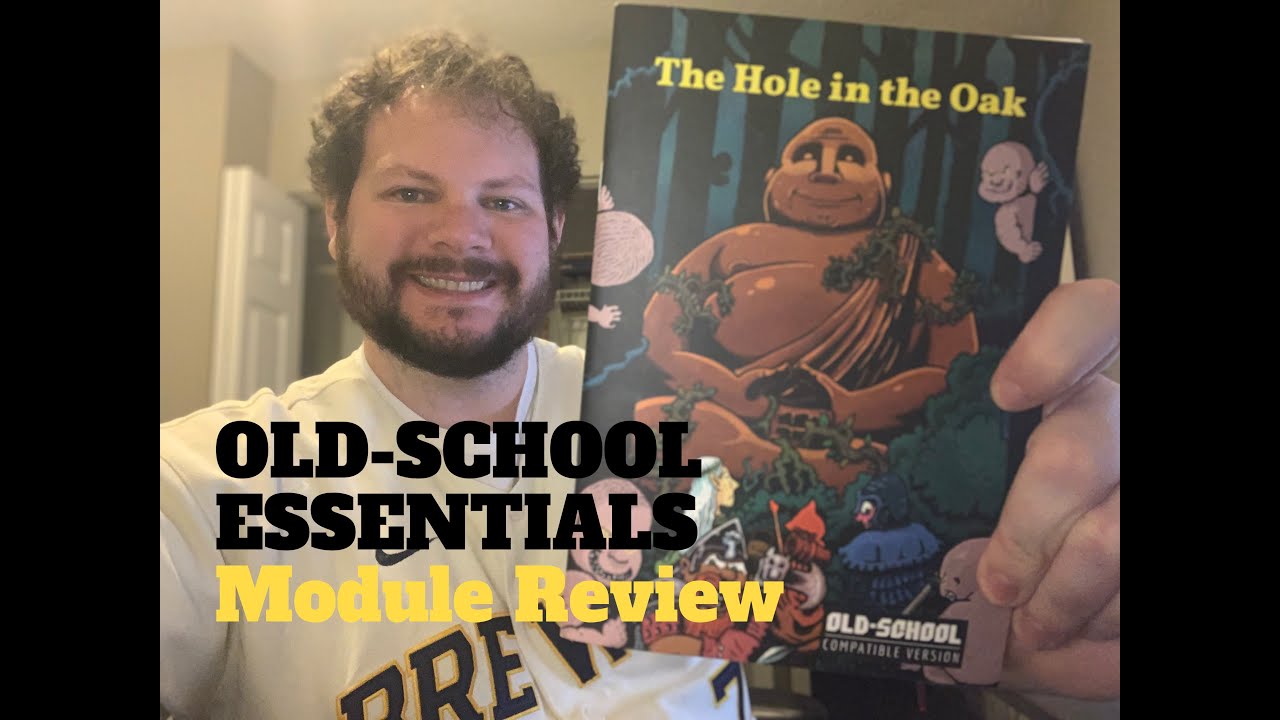 Review for The Hole in the Oak
by PM Schramm

What makes a good introductory module? This is a question that must be asked by every game publisher bringing their ruleset to market. What good is a ruleset if there’s no adventure to go with it? You could certainly leave it up to your user-base to make their own dungeons and run their own homebrew settings, but that, in this author’s opinion, would be a huge missed opportunity.

The intro module is almost as old as roleplaying itself. For an older example, one only needs to look at B2: The Keep on the Borderlands for a fantastic glimpse at how TSR Hobbies, Inc. expected their game to be played. The 15 out of 20 I granted to that module is a baseline for all others reviewed in this series. “Is this module better than Keep on the Borderlands” is something I ask myself every time I open a roleplaying adventure book. Often the answer is “no,” but on rare occasions authors are able to show how their game is supposed to be played in a beautiful marriage of form and function that puts other examples to shame. Does The Hole in the Oak live up to these lofty expectations? Well…yes and no.

Immediately upon holding this module expectations are set high. The colors are vibrant and the print quality of the full-page image on the front is superb. The characters depicted immediately evoke memories of those classic roleplaying games from the ‘80s, and the heroes especially could have just as easily found themselves in the 1e DMG. The rear shows a wizened old wizard, along with a blurb of text, setting the scene (an old oak tree) and promising a classic dungeon adventure.

From there, things take a downturn: the interior covers are blank. This product looks and feels like no corners were cut, with no expenses spared, in an effort to deliver a high-quality experience. The fact the interior covers are not printed is either a cheap cost-cutting measure, or a vast oversight. Either way, extremely disappointing. The booklet is staple-bound, the middle falling open to nowhere of import, just roughly a quarter through the dungeon.

The first page of The Hole in the Oak is devoted to credits, showing the writing and layout done by Gavin Norman, the illustrations by James West, and the cartography by, one of my favorites, Karl Stjernberg. Copyright is at the bottom, and an ad for Necrotic Gnome’s other products fills the remainder of the page. The last page of the document has half of its space devoted to a centered picture, and fills the rest with some notes on how to expand the dungeon. The rest of the booklet is fully and attractively utilized.

The first spread is Karl’s gorgeous map: intricately detailed, highly readable, and even color-coded for usability. It’s absolutely fantastic. The only complaint here is its location. As it’s not on one of the interior cover spreads it’s difficult to flip to. If printing the interior covers was not feasible, even moving it to the middle of the booklet would have been a good choice, as that way the reader can flip to it immediately. An important aspect, as it’s the single thing in this module that will be used the most. The next page shows the Table of Contents, followed by the Introduction.

This section is extremely important for an introductory module. It’s where the author gets their first real chance at explaining how their game should play at the table to the referee. Granted, in Necrotic Gnome’s magnum opus the Old-School Essentials Classic Fantasy Rules Tome there are a few tips and tricks on how to play, but to quote the book itself, “By far the easiest way to learn what RPGs are about and how they work is to simply dive in and play,” so this section is the first real opportunity to impart that tribal knowledge to the reader. Overall, it could have done a better job at that; however, if you already know how to play an OSR game, this introductory section hits all the key points: compatibility, required books, suggested character levels, descriptions of the setting, history of the dungeon and the factions (and their relationships) within, some unanswered mysteries the players may uncover that the referee can riff on, rules for swimming in the river, and a rumor table. Everything is well formatted with brown headings and no words spill from one page to the next. This style continues into the random encounter table and room keys, which takes up the remainder of the module.

This is where The Hole in the Oak really shines. The formatting used for the Old-School Essentials books is some of the best out there, and this module is no exception. Every area name is in a brown heading with bolded descriptions below that pinpoint things that are immediately apparent to someone entering, followed by explanatory text if said item is investigated further. For example: “5. Cloak Nooks Muddy floor (hoof prints).” It’s immediately apparent this section is describing nooks in the wall for cloaks, the floor of which is muddy and, if investigated, full of hoof prints. Flipping back to the map, although a pain, will confirm this.

Overall, the usability of the layout is great; however, at times there are a bit too many things bolded and a room description can run together. In addition, some things that are not of equal importance to the rest of the bolded items is included or out of order. For example, on page 15 there is the description of a lurking spider in the ceiling. The first thing the party would notice would be its glinting red eyes, but this description is below the fact the spider is “lurking,” which could have safely been removed from the room description or instead moved to the non-bolded supplemental text. Finally, the overuse of the brown headings can at times overwhelm pages to a certain degree, for example 25, the Mutagenic Ogre’s Den. This page has three sub headings, all brown, and one which has a number in front of it, which causes a bit of confusion to the eye at a glance. A different color for these subheadings would have been advisable, similar to the orange text used to pinpoint creatures.

Overall, The Hole in the Oak is an incredible module. It’s inventive, fun, unique, and has lots of great moments throughout for your players to role-play through, from a shadow groundskeeper that attacks anyone who enters his garden to a wight in his coffin to a group of heretical gnomes, this booklet really has it all. But, is it a good introductory module?

Ending where we began, yes and no. It’s fun, it’s fresh, and it’s deadly, but there’s not a lot of tips and tricks for a novice referee. As written, the party will spend the majority of their time running around like chickens with their head’s cut off as a good number of the encounters in this dungeon will kill a group of level 1-2 adventurers. It’ll take nuance and skill from the referee and a solid bit of improvisation to ensure that a group can get through the tree without losing every member a few times over, and this isn’t a skillset everyone is born with. As an introduction to your game that’s a missed opportunity. I understand why these parts were excluded however, including such tips would muddy the text a bit and be harder to format in such a pretty fashion. That’s why we end up with such a tight and well-formed module.

Another thing we’re missing here is a town. A truly great introductory module should include one. It’s not called dungeons and dungeons after all - although I suppose that’s not a great argument as hopefully you’re not encountering dragons in town! With nowhere to supplement their forces or pick up retainers however, deus ex machina will reign supreme in injecting additional forces to the adventuring party, and resting and leveling will be impossible.

With the above caveats, it must be mentioned that, minor nitpicks aside, this is a really good dungeon. If you take the adventure at face value as simply that and find the supplemental knowledge you need as a novice referee elsewhere you can do a lot worse, and not much better. 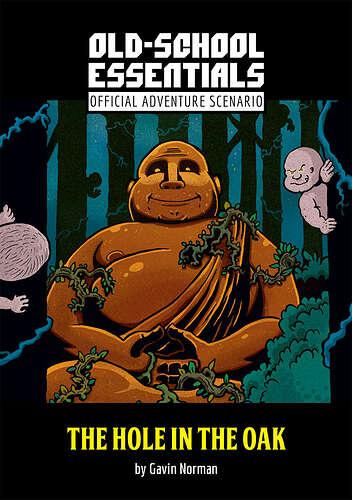 The Hole in the Oak - Necrotic Gnome | Old-School Essentials | DriveThruRPG.com

A hole in an old oak tree leads characters down to a maze of twisting, root-riddled passageways, the chambers of an anci 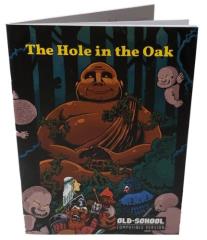 Hole in the Oak, The - Fantasy RPG from Necrotic Gnome