Review for The Phylactery
by PM Schramm

Levi Combs of Planet X Games, creator of Jungle Tomb of the Mummy Bride and An Occurrence at Howling Crater , promises his Zine Quest 2 contribution, entitled The Phylactery , to be a “quick and easy resource that you can pull ideas and plot hooks from for use directly at your gaming table,” with “no fluff…and nothing padding out the page count.” However, Combs also expects the referee to “take what works for you and ditch the rest…[to] adapt what you like and make the ideas…your own.” The later promise is delivered upon with The Phylactery - there’s many pieces contained within that are worth picking apart and implementing into your OSR game. Unfortunately, this mindset is at odds with the previously stated mission, and because of this disparity The Phylactery falls short of bringing a cohesive product to the table.

The Phylactery is a zine in the truest sense of the word. The printing is done on low-cost, glossy paper and, as it’s an 8.5”x5.5” print, it feels and looks very similar to a small magazine. The booklet, coming in at 48 pages including the front and back cover, is printed entirely in black and white, outside of the front cover, which is done in full color.

While the raw page count is high, how well is this space utilized? The rear of the zine is an ad for a future edition of The Phylactery with no estimated publication date, nor any data on where to get more information on how to buy the next issue. Both sides of the last page is a copy of the OGL, the rear inside cover appears to be unused concept art, the front inside cover contains credits and more OGL information, and the first page of the zine contains thoughts from the author and a list of dedications. While the remaining 41 pages contain many full-page images and the bestiary font spacing does eat up space, there is still plenty of content within the booklet.

The construction and build quality is low-budget, but as the zine rings up at only $10 USD shipped or $5 USD for a PDF copy, it can be appreciated that one is not being overcharged for cheap paper and assembly. It’s clear what was important in the design philosophy of The Phylactery was the ideas it contained. The whole production has a very homegrown quality to it. That said, a little more care into the structural integrity of the zine would have been appreciated, as even with minimal time spent with it one can see the staples beginning to wear through the paper. It will not last forever.

The zine does lie flat on a table or in one’s hand while reading it, and slightly bending the pages while flipping through it has no ill effect on the booklet.

The content within The Phylactery appears to be written for 1st Edition Dungeons & Dragons; however, nowhere is it specified exactly what system Combs was designing for. Overall, there is quite the eclectic mix of material a referee can choose from - setting pieces, bits of lore, NPCs, magical weapons and items, potions, a spell, a dungeon, a keyed island, a hexcrawl, and a bestiary.

Much of the material appears to be pulled from the author’s own homebrew setting. There are numerous references back and forth between the various pieces within. For example, on page 8 under the section on Helmdor, the author references the NPC died during a conflict with the Cult of the Demon Dragon. This same cult is once again mentioned on page 10, under a magical item known as the Dragonsbreath Bow. That said, there is no overarching guide within The Phylactery laying out the extent of the homebrew setting and which pieces are leveraged elsewhere, so it puts the referee in a strange position when attempting to pull pieces out of the zine for use at their own table. How much of the lore should be used? Is this person, location, or item mentioned somewhere else in the zine? If so, where?

Another issue with the lore pieces included in the booklet is that it’s unclear who they’re intended for. For a zine with the stated goal of including “no fluff,” these lore pieces seem to be exactly that. They appear to be seeds of a greater whole that is underneath but never fully explained. If they’re for the referee, showing how this world is connected would be a critical aspect, as one can’t simply pick an individual piece and seed it into a live game without establishing the deep hooks its contains as well. If the lore is for the players, how is this information expected to be revealed to them?
The majority of this zine is these lore snippets. Rather than being quick and easy to use, they prove to be quite difficult to actually implement at the gaming table. For example, take the Doomgiver mace on page 11. A referee simply looking for a magical item to quickly implement in their game would be disappointed as while the description of the item takes up half a page, in reality the weapon is just a +2 footman’s mace with lore attached to it.

Fragments of brilliance do shine through however. Some of the included pieces within The Phylactery are incredibly imaginative and could boost any game they are implemented into, for example the Dragonsbreath Bow and the Elutheril’s Starbow. But, it seems for every fantastic inclusion there seems to be one that isn’t all that useful, such as the Testament of Nammul, which is really just a spell scroll with lore, or the derivative, such as the Chaos Throne, which, although it is accompanied by lovely art and a few tweaks, is really just a choose your own Deck of Many Things. It will be the referee’s job to sort through and find what they like and what they can actually use.

The major usability issue with The Phylactery is how intertwined the lore is with the various inclusions within the zine; however, there are other areas which could have been improved upon as well.

While no one could argue that Combs didn’t include a lot of content in his publication, sorting through it is problematic. The Phylactery is loosely organized by items, NPCs, locations, and bestiary, in that order, but there are exceptions interspersed. A table of contents would have been a valuable accompaniment. In addition, the rear and interior covers do not utilize their accessibility, and the center of the zine falls open to the back half of a block NPCs and the start of a keyed dungeon on the opposite page. Information is most easily accessed when it’s contained on a single spread and, unfortunately, The Phylactery doesn’t adhere to this mindset. Finally, the keyed locations in the zine don’t stick to a consistent style on the location of their corresponding map. For instance, the map of Utos is at the beginning of the keyed descriptions, while the Fungal Grotto and Grindhouse maps are located at the end of their respective keys.

The Phylactery contains many great ideas and lots of snippets of lore from a connected world but fails in its mission to be a quick and easy resource to pull things from for immediate use. While usually having a lot of content is a benefit, this zine would have been improved by trimming it to be more concise and targeted. Combs fit a lot of material in for this first issue, which unfortunately is to its detriment. The booklet would be improved if it was rescoped to be a setting guide that showed the referee how all the pieces fit together. This, along with some usability tweaks, would go a long way. As it stands, unless a referee is interested in picking all the details within it apart, The Phylactery is uncoordinated. 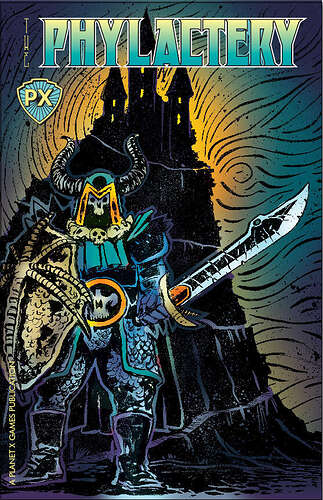 The Phylactery is an all new, original zine that has the heart and feel of the old school heroic fantasy we grew up play