Review for Tombcrawl
by PM Schramm

Created by Zach Smith of Static Void Records and published by Exalted Funeral, Tombcrawl is a single-player, GM-less RPG bundled with a Dungeon Synth soundtrack. Deadly and dark, the tomb, coupled with the creepy soundtrack, pulls the reader directly into the decrepit world created. Written in a choose-your-own-adventure style with minimal rules, this adventure should provide a few hours of fun for an interested delver. That said, a lack of real choices to make coupled with a dice rolling mechanic that tells the reader what happens next makes this attempt at the style feel like its on rails.

Printed in an oversized zine format and featuring high production values, Tombcrawl measures in at 8.5”x11”. Leveraging glossy paper on the interior and a glossy, heavier paper as the cover, every one of Tombcrawl’s forty-eight pages exudes quality. Although no color is used in this printing, the RPG doesn’t really need it. All the artwork included has a simple theme to it, with scratchy, sloppy lines that fit the tone of the booklet nicely.

While Tombcrawl looks and feels nice, a lot of the space is not utilized. The font size is large and there are many blank pages included within. However, as a player will be frequently flipping back and forth to different pages depending on where the adventure takes them, this is more a benefit than a detriment, outside of the unused pages.

With a good setting, tone, and production value, Tombcrawl sets itself up for success; however, it has a major failing in its content. When creating a single-player RPG there are few greater sins than creating an adventure where the input from the player is irrelevant, and random chance is the only factor that matters. Unfortunately, that’s exactly how this RPG is designed. There are only three decisions for the player to make while playing this game: the name of the PC, which way to go after the first room, and when to use an item that restores hit points. That’s it. Everything else is determined randomly and, if the incorrect option on the first page is selected (the only real decision a player can make on where to go in the game) it’s an instant death. Page one: discovering the source of the sound of rumbling water takes the reader to page 20, waiting for help takes them to page four. On page four the PC dies alone, “starved and raving mad within the hallowed tomb, never to be seen again.”

The other forks in the game are determined randomly. The core mechanic is roll 2d6 and follow the instructions listed on the page. This is an ok mechanic for fighting the monsters, although many battles take longer than necessary - increasing the damage done and decreasing the HP would be appreciated here, but for determining which pathway to go it doesn’t make much sense to not let the player decide which way they want to proceed. For example, page 29, roll 2d6: a 1-5 means the player takes the left tunnel, a 6-12 means the player takes the right tunnel. The mechanic does make sense in certain situations like on pages nine (leaping over a chasm) and 16 (rolling dice), but in those instances the wrong roll leads to an instant death. For an RPG that states “the choices you make will impact the outcome of the story,” it seems that Tombcrawl has a big miss here.

This RPG has a habit of drawing the reader in with its soundtrack and tone, then ripping them right back out with a combat that’s too long, a misspelled word, or an incorrect usage of grammar. When it’s just the book and the player reading it, there’s nothing else and no referee to separate the failings and the game, so they come into direct contact in a disjointed way. For example, right away on page one, when the player is reading the prose and getting drawn into it with the music, it’s extremely jarring when “delapidated” is written, or on page 10 where the booklet says “the may use,” or on page 15 where “ware” is used instead of “wear.” Any semblance of being engrossed into the world is immediately halted, and the reader begins thinking more about what is written rather than what is being conveyed.

Creating a single player, GM-less RPG is no easy task, and this debut by Zach Smith has many examples within it of why that’s the case. From difficulties pulling the reader in, to disjointed writing, to blank, and even completely unused pages, Tombcrawl has a lot of lessons within it on what to do differently when designing one’s own GM-less game. Unfortunately, it doesn’t seem that Tombcrawl is publicly available any longer; it has been pulled from Exalted Funeral, and Static Void Record’s Bandcamp page now dead-ends. Hopefully, this is not because of the issues with the booklet, as while this first attempt isn’t particularly good, moments of brilliance do shine through, especially with the only puzzle, which is included on page five, and the author should focus on where this game succeeds, rather than on where it fails. A second attempt at this style would hopefully be more successful, and more fun to play.

As Tombcrawl seems to have been pulled for sale, please review this Let’s Play instead: 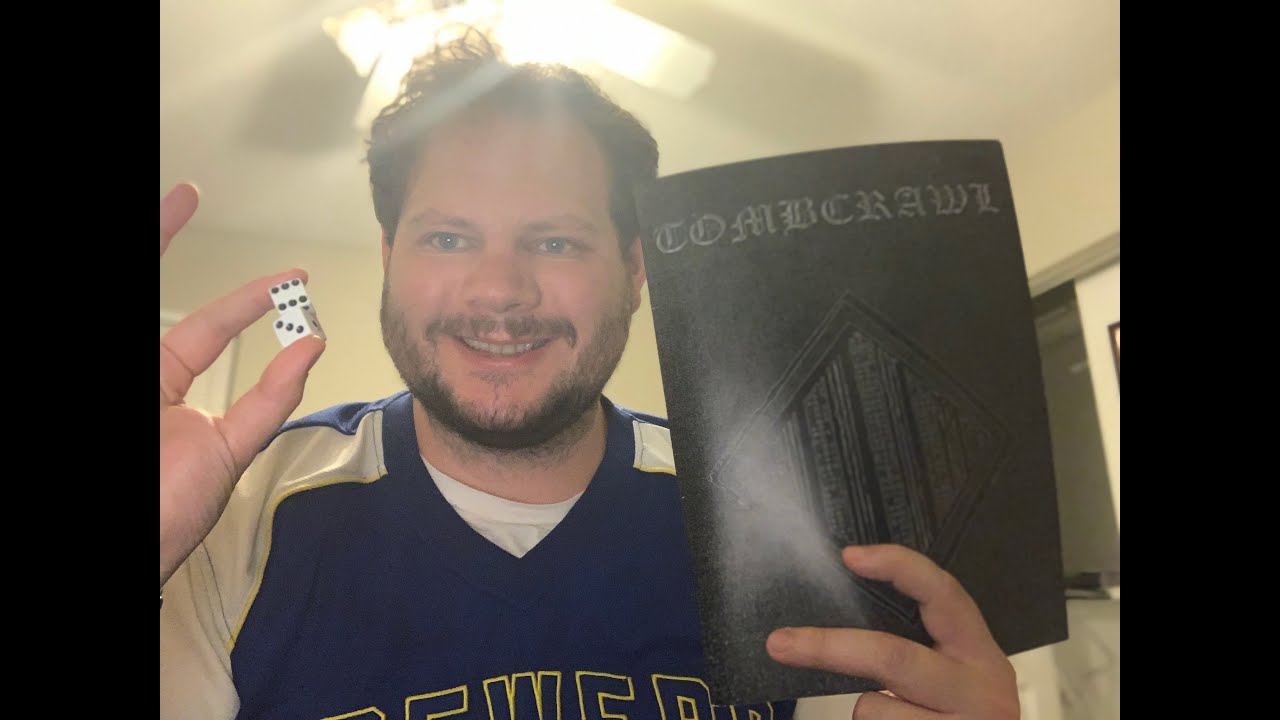 Great review! I think I could have fun with this even though I do agree with your criticisms mentioned in your video review.

Thanks Rusty, glad you enjoyed it!

Yeesh, I can’t see myself ever picking this up. Thanks for saving me some $$ haha. I think if you just want a solo dungeon crawl, there’s a bunch of great solo dungeon-crawling boardgames out there.