Towards a Simple Magicka Game

I’ve written a fair bit about converting videogames to tabletop experiences. It’s kinda my thing, even if lots of it doesn’t amount to much. I consciously moved my play habits from videogames to tabletop not all that long ago, and just in the last week I’ve gone back to my Steam library, largely looking for some inspiration.

So lo and behold when I remembered the first PC game I ever played: Magicka. 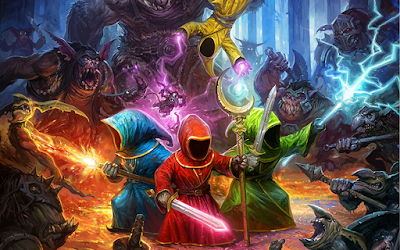 Staff and sword and robe these wizards have, but Gandalf they are not.

A glorious, creative, buggy mess which I absolutely adored. It got me into PC games, which got me into CRPGs, which eventually brought me all the way here. Now, the time has come to close the circle.

Magicka is a loving parody of fantasy games, both of the video and tabletop variety. It references D&D and Diablo in its opening narration. Of course, I didn’t understand the references then. My sense of humor was still on the level of laughing at the silly accents. Coming back to it all these years later, the fingerprints of tabletop games are all over it.

And it occurs to me that it might make for a quite entertaining and over-the-top combat engine. Let’s take a walk.

The Fun of Magicka

The fun of the videogame largely comes from the tactile experience of pressing buttons to cast spells, string them together, and deploy them in the heat of the moment. Moving around while trying to cast, and catching your teammates in the crossfire, is a big part of the fun. The ease of resurrection also means that blowing up your teammates is a reason to laugh, not curse each other.

That panicked, frantic effect doesn’t translate over well to tabletop RPGs, in which you can actually mull over your turn. Enforcement with timers would be tyrannical if overused, and even then would not render the desired effect.

In the translation from videogame to tabletop game, I would say that a shift in play experience would be in order. Cooperative teamwork (with some allowance for playful inter-party murder) is the name of the game.

Moment to moment gameplay should also be addressed. The dominant tactic should not simply be to charge up maximally powerful spells every round and throw them everywhere. The desired direction of play should still have that frantic element. We want to create situations in which a chaotic mix of spells and melee, charging and holding, defending, attacking, healing and changing the landscape, are the norm. Death rays shot from across the map are boring, and should be the exception. 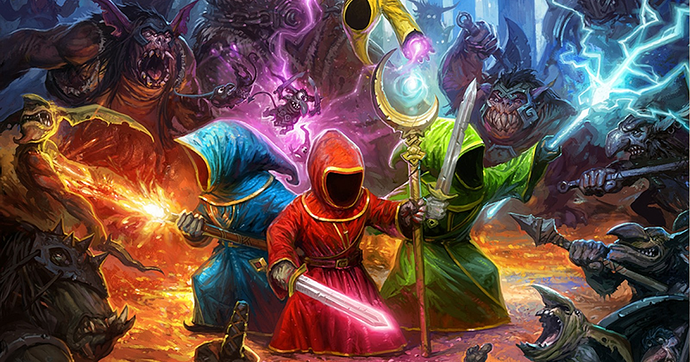 Towards a Simple Magicka Game

I've written a fair bit about converting videogames to tabletop experiences. It's kinda my thing, even if lots of it doesn't amount to muc...