Wargames in the OSR

This might be an oddball thought to have here, but due to me having a growing interest in Wargaming and mini-painting, part of my brain has been milling on what Wargames in the OSR would look like.

For a frame of reference, my most recent reading related to rulesets has been Blackpowder 2e, a wargame meant to simulate warfare that occurred from the Spanish War of Succession up to the Spanish American War.

This ruleset (like other wargames) is kind of packed with detail on the period on how units usually behave in a battle, but in the same stroke the ruleset is filled with various procedures for the general actions used in the game that (at least on the surface) makes things a little easier to handle.

Part of me thinks an OSR Wargame would lean heavily on procedures and quickness as the main focus of the game with the scale either being set to simulate small battles like a Commander leading something like a small regiment or focus more at the skirmish level or Warband level which would be similar to what would normally be seen in an OSR game.

Another part of me would assume it would just be another OSR ruleset just with the scale ramped up to include more than just a singular player controlling a single PC. The only difference being is that there would be more of a focus on the greater group than just one member of said group.

You all have any thoughts about this?

Emmy Allen (Gardens of Ynn, Stygian Library, Wolf-packs & Winter Snow) has a miniatures game / wargame called Dolorous Stroke, about knights, chivalry. I have it but haven’t read it properly yet.

The OSR has a lot in common with Free Kriegspiel Revival, which is great for wargames. FKR takes very complex situations involving tens of units, terrain considerations and morale and uses the referee’s judgment to distill it into a roll or two.

If you want the same speed and energy that a well-run round of Basic D&D combat has, but with a dozen combat participants, traditional wargame rules (OSR-inspired or not) maybe won’t cut it. Warhammer has pretty simple combat resolution, but still the turns take a long time, and can feel a little abstract compared to TTRPG combat, due to their simplicity. There is also not much flexibility, you can’t pick up improvised weapons, throw dirt in your opponent’s face, etc, unless those rules or abilities exist.

So if your basic mass combat system is designed for speed, there may not be so much granularity because every additional roll or table checkup slows it down. When you need to make a ruling, your system may be too simple for that ruling to make sense. So a system needs some complexity, probably a bit more than a warhammer-like system? But then, complexity slows it down.

FKR kinda does what OSR does, but has even more flexibility in the rules. Because rules are only handled by the referee, nothing stops them from using b/x rules for duels, for example, but using an entrirely different system (or just eyeballing it) for mass combat.

P.s. i am by no means a wargamer or expert on warhammer or fkr, so forgive me as i talk out of my a**

To really get an authentic OSR feel to your wargame, some nod to Empire of the Petal Throne would be needed, since all the founders played it

One thing I noticed is that Wargames seem to occupy a sort of spectrum where on one end you have simply and quick rule sets versus more intricate rules with larger tables and loads of different modifiers (some more resembling board games from what I’ve seen online in certain cases).

In addition, most systems I’ve seen use a d6 based system where there is sort of a roll off between two sets of units. One roll is to attack, another is to defend with the loser either taking a wound/damage or getting smoked and taken from the board.

Relatively speaking, a Wargame can be pretty simple like the War | Maker Engine that I have looked at or as complex as Kreigspiel with the middle being Warhammer (or Warhammer functioning) falling in the general middle from what I’ve seen.

The main thing I would see in a flexible Wargame would be something that is quick and can allow for rapid resolution of larger blocks of units doing their attacks and resolving said attacks. I think that would be the first thing since from watching game reports and recorded games, the dice rolling is the longest part which balloons more depending on the particular mechanics in play.

A second thing that would be an easy OSR flavor would be the codification of conditions, but in a way that would make it easy for any unit to say throw sand into an enemy’s eyes, transform terrain into something more usable, etc with each Condition having examples on how to apply them. Though I feel like this could be done easily with a simple roll mechanic, but that would be an increase in complexity (possibly) and move away from OSR.

I agree with your idea where the rules need to be light, but have a level of complexity that makes the system itself clear to use. Though, this is mainly driven by what kind of wargame it is, certain periods or themes are easier to simulate than others, which directly affects how many and what kind of rules are needed. A Roman Empire Centric Wargame would (at least theoretically speaking) would be easier to do than say a American Civil War or Napoleonic Conflict (or even WW2 or Present Day).

I think my own question boils down to is “what is the goal of a Wargame ruleset? What’s it scale and what is it trying to simulate? What would the OSR best work with?”.

Sorry it took me so long to get back, life has been CRAZY with work for me, but I wanted to take the time to reply to you.

I’ll have to look into this, thank you for bringing this up to me!

I think my own question boils down to is “what is the goal of a Wargame ruleset? What’s it scale and what is it trying to simulate?

This is the question! It’s tough to attempt a universal system, because it either becomes too bulky or too abstract to be a believable simulation. For example, creating a simple system where two 500-strong armies clash is quite possible, because it doesn’t matter if there are a few wounded soldiers in the mix, or if they have slightly varying skill levels or equipment - their sheer numbers flatten out such differences. A simple roll-off with some modifiers, and maybe a casualties table could resolve the whole battle in minutes, and it could still feel realistic.

When you want that same system to also handle small battles (say 10v10), all those little differences become key. Here a simple roll-off & casualties tables are too simplistic, feel arbitrary and maybe unfair. If you want meaningful differences between a single goblin and a single knight, you might want armor bonuses, HP values, critical hits etc. If those detailed rules are then applied to large scale battles, the detail piles up. Suddenly you have to track 500 sets of HP, armor, etc.

My example system is pretty stupid, but maybe it helps my point come across.

spirit of the OSR vs recreation of the OSR:
the actual original wargames the founders played were chits and counters, dice and rulers stuff, or ones they created themselves with various conditions for battle, which evolved into Chainmail and so on.

I think of it as D&D bringing intangible elements into focus at the same time as it expanded the very basic “statistics” of the wargames they played into more and more elaborate detail. Including for example transferring the original experience point progression concept from the wargame where it started into the new D&D version.

Chris McDowall is working on an OSR influenced war-game called The Doomed (previously Grimlite). I think he is going for the latter of the two options in your original post. There are play tests on his Youtube channel 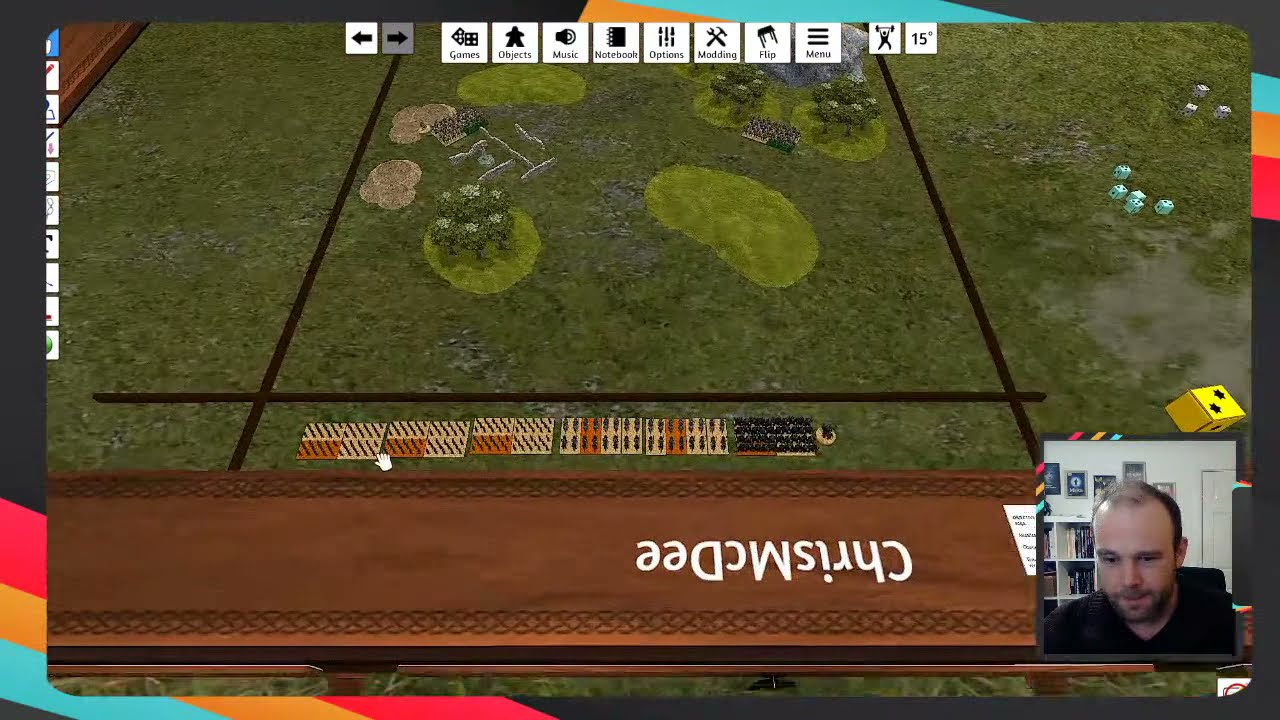