Sometimes I see a 2D6 random table which includes a rule about doubles; usually if the two top faces are a double (i.e. the same number) then something unusual happens, e.g. a wildcard event. What …

cool idea with the “kissing sides”!

Thanks for sharing! It’s great how this enhances the tactile part of rolling dice, instead of just reducing them to little random number generators.

You mention the (lack of) independence from the main result, but it’s a little more interesting than that, so I’ll describe it here in case it’s useful for you. The post says:

These ‘side doubles’ are more or less independent of the main result on the top faces, i.e. about 1 in 6* (although if the top faces are a double, then the probability rises (I believe) to 1 in 4, which seems app to my mind). 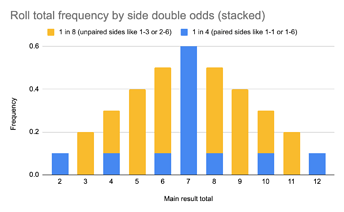 Two nice results of this:

I missed the idea that the ‘inverse’ of a double (AKA top faces ‘sum to 7’) also has a 1 in 4 of giving a ‘side double’! Or rather, I failed to follow this insight through to the conclusion!

Since you are good at this, am I correct is saying:

Here’s a summary of the possible combinations:

Maybe most readable with a common denominator:

This is pretty interesting and something I’ll have to look into more intently for my home games and the like.

Reading @gravenutterance’s replies, I knew there was a bell curve involved with the 2d6, but never really thought about the extra layer of possible events that would occur with doubles and the like. The showcased math of their work warrants special events to occur.