You Got a Job on the Garbage Barge - OSR Zine Review

Gonzo. If there was one word to describe this Zine Quest 2 submission that would be it. Written by Amanda Lee Franck and featuring contributions from a laundry list of special guests, You Got a Job on the Garbage Barge is humorous, creative, fun, gross, and, above all else, weird.

Essentially a setting booklet, this zine depicts a world of garbage floating across a nameless sea being pulled by two tugboats, one piloted by a single-minded artificial intelligence and the other by a just as single-minded old man. The inhabitants of this buoyant trash heap include a slew of talking animals such as possums, raccoons, fish that float in the air, and even beetles. Outside of these strange creatures, normal humans, all with a few eccentricities, reside in this world as well, leading to an interesting series of interactions the player characters can have with their environment.

This all would normally lead to a pleasant read; however, You Got a Job on the Garbage Barge suffers from a large number of copy-editing errors that makes it distracting to process and an effort to get through. These errors, coupled with a suboptimal layout that makes it difficult to locate pertinent information, unfortunately lead to this zine missing the mark.

Printed in a 5.5”x8.5” format, this zine clocks in at a whopping 60 pages including covers. The entirety of the printing is done on glossy, cheap paper in black and white, excluding the heavier, card stock cover, which is done in shades of green, barring a shanty section printed on the rear of the booklet. This card stock cover does pop upwards while the zine is lying flat, which provides enough pull to allow the zine to lie open in one’s hand or on a table. The print quality is poor, and even after minimal time with the zine it will begin to show wear on its staple-bound spine.

On the space utilization front, You Got a Job on the Garbage Barge does almost too good of a job. Every square inch of the interior of the zine, outside of a small credits section on the last page, is packed with walls of text and tables with sporadic artwork interspaced in between. There is no shortage of content here for your $14 USD shipped.

Most of You Got a Job on the Garbage Barge is setting content and world-building. Paging through it we see a keyed map of the known barge, some items for sale and rent, animals acting as coal mine canaries, ramshackle item tables, various art pieces by Scrap Princess, lists of NPCs, garbage gasses, intelligent animal inhabitants, two adventures taking place in the setting, and several large appendix tables including one for smells, one for trash, and one for random encounters. The smell appendix table even includes sub-tables to extrapolate on its entries.

While the world building can generally be described as “good,” many issues are spotted in a read-through of this zine: spelling errors, missing details, capitalization inconsistencies, wrong word forms, spacing mistakes, failure to adhere to a single distance standard, inconsistent formatting, grammatical errors, out of order keyed locations, and the inability to stick to a consistent standard throughout. There’s even a single obvious 5th Edition Dungeons & Dragons inclusion in an otherwise completely rules-lite booklet.

In addition to these errors, the layout of this zine could use some work. There is no table of contents included, as the first spread dives directly into the content, and no index at the rear of the zine. The center spread also doesn’t leverage its ease of access, it’s simply another page, and starts with the bottom part of a table, the remainder of which is contained on the previous spread.

Some table entries do include page numbers to help the reader find things; however, many do not. This is recurring throughout the booklet. If everything was inter-referenced by page number usability wouldn’t be hindered; however, as it stands, with no table of contents, index, and only some help in navigating the document, 60 pages of zine content is hard to comb through to find things in a pinch. This makes it a requirement to read You Got a Job on the Garbage Barge in its entirety, front to back, more than likely multiple times, before fully getting a grasp on its contents.

While not ideal, and difficult due to the recurring grammatical errors, reading through all 60 pages would be doable; however, many of the inclusions in the zine are disordered or at least not logically placed, making the whole thing hard to follow. For example, the adventures in the zine don’t show up until midway through. If one is reading front to back, many NPCs have been provided to the reader, along with each keyed location, by the time this first adventure is read. This would logically lead the reader to believe they know the key NPCs in the setting already; however, a new NPC is revealed named Martina in the first adventure. Who is she? There’s no table of contents to review and no index to find what pages she’s on, a whole 34 page reread would be required to locate her if she was accidentally missed. In actuality, her details are revealed to the reader two pages later, on page 36, after some unrelated content.

Formatting issues aside, which, in the tables especially, appear to be linked to copy and pasting previously written content in without review, there are still many problems in how You Got a Job on the Garbage Barge did its layout. As it’s already a 60 page booklet, many of these problems cannot be fixed while adhering to this format. The zine as a whole is a missed opportunity to work within the medium, and would be better formatted as a hyperlinked blog or PDF.

As it stands, the digital copy is a requirement and the printed version should be avoided. Even though the PDF version isn’t intelligently hyperlinked like that type of product should be, at least the reader can leverage a search function to find the information they need quickly. Just like the lack of diving into the “Revolution” that is recurrently mentioned throughout the zine, You Got a Job on the Garbage Barge seems unfinished. 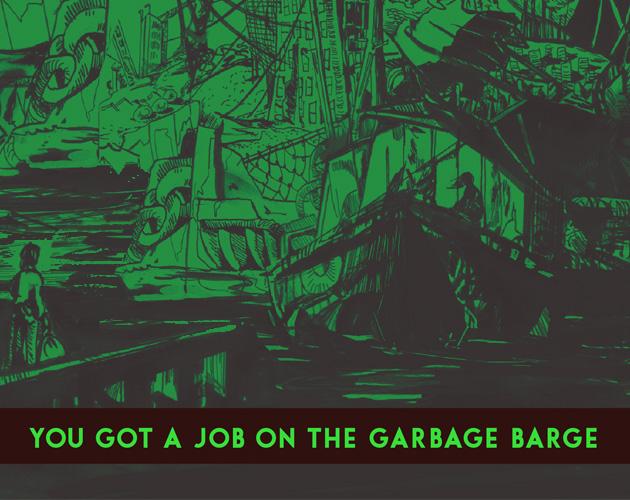 YOU GOT A JOB ON THE GARBAGE BARGE by amandalee

an osr style setting, adventure, and 100 kinds of trash

Bummer about the quality and editing issues. Maybe they’ll be able to sharpen some of that up in the future. I’d still like to give the PDF a try as is!

Any chance you could snap a picture or two of the quality of the zine?