What do you get when you bring together some of the top minds in the TTRPG scene and have them work with each other on two-page dungeon spreads? You get Dissident Whispers, a collaborative piece created by a large group of extremely talented individuals, printed and sold by Tuesday Night Games.

Like most collective works, these spreads are not created equally: some are incredibly imaginative, some are uninspired, some are usable right away at the gaming table, some are simply ideas that are put to paper without being fully fleshed out yet. But, the wheat exceeds the chaff here, as can be expected with the names that helped bring the project to life, and no matter who you are or what RPG you play, Dissident Whispers has something great for you to play with.

The first thing one notices is how striking this book is. Although it is soft cover, it feels like a coffee-table piece. It’s printed in an 8.25”x11.75” format and advertises on the front that it contains 58 original RPG adventures and includes the Mothership, Mörk Borg, Troika!, Electric Bastionland, Ultraviolet Grasslands, Dragon Crawl Classics, 5e, B/X, Trophy Gold, and Mausritter systems, along with some system agnostic adventures. The rear is plain, containing a quote and a logo for The Whisper Collective. The interior covers are not printed outside of some credits on the rear, the facing pages include artwork. Paging in from the rear reveals the Open Gaming License, and from the front you’ll find a few more credits, the table of contents, a one-page “Introduction” that’s erroneously labeled - having nothing to with the actual content of the book it’s more of a manifesto - a full-page copy of the cover artwork, and then the project credits. After that, Dissident Whispers doesn’t mess around - the rest of the book is two-page spreads.

So who exactly made this book? The product credits are quite extensive and is in excess of 90 individuals, much too many to list in this brief review. Unfortunately, it’s difficult to determine exactly which pieces were worked by whom. One can examine the individual spreads to see who wrote it, but paging through each one and finding that information is no easy task - each spread has a different layout and puts this information in a different spot. It would have been helpful if the contributors were in the table of contents or listed in the credits, but the only additional information provided in these sections is what system the spread is written for and in what capacity the credited person contributed to the book.

The first set of adventures in Dissident Whispers are system agnostic, which means they should be usable with any TTRPG. This doesn’t seem to be universally true, but is mostly the case.

Tuesday Night Games was so kind as to include two pamphlet adventures for physical purchasers of Dissident Whispers - The Haunting of Ypsilon 14 and Hideo’s World. Both of these are really great pamphlet adventures and better than most of the Mothership adventures you’ll find within the book itself.

The Haunting of Ypsilon 14 is an alien-inspired type scenario where there’s a monster on the station with you that will murder the inhabitants until it is found and stopped. Tuesday Night Games understands that it’s the unseen that is scary, and leverages that mindset appropriately here - player characters have to piece together what has happened with clues left behind by the inhabitants of the mine and the monster itself.

Hideo’s World has a great premise - the player characters are trapped in a video game! Bugs and glitches abound as they explore this digital plane to find Hideo and pull him from his eternal slumber caused by the prototype gaming console he’s created. The denizens within don’t want this to happen, as it will cause them to cease existing. The best part of this scenario is the ability the players have to interact with the rules of the world itself through a “Settings” room that allows them to do things such as change the brightness of the world and even break it, showing the code that runs underneath.

While these two pamphlets are standouts, there are some interesting scenarios to explore within Dissident Whispers.

The best material in Dissident Whispers can be found here. Each one is a knockout oozing with substance and style. This book is worth getting just for this section alone. Every spread is beautiful, full-featured, and well designed. The only downside is there aren’t more of these inclusions.

These really belonged in the System Agnostic section as many of them don’t quite adhere to Basic/Expert conventions. For example some use ascending AC, one has “WIS” saves, and one doesn’t even have stats at all. That said, these adventures are definitely serviceable and will be able to be used in the OSR game of your choice. If the editors had moved some things around and removed some of the more off-brand “systemless” inclusions to their own section while replacing them with these it would have made more logistical sense as all of the retroclone games would have been in their own area. As published, it’s a little hard to pick them out of the first part of Dissident Whispers.

Adventures for Other Systems

These adventures are for a myriad of other systems noted in the table of contents - one for Dragon Crawl Classics, two for Electric Bastionland, three for D&D 5e, one for Mausritter, one for The Black Hack, two for Troika!, two for Trophy Gold, and one for Ultraviolet Grasslands. Notable is the fact that the 5e adventures are nothing to write home about, so if that content is what the reader is looking for, Dissident Whispers probably isn’t for them.

Overall, Dissident Whispers is a good product. There are some middling inclusions and some that are difficult to use, but many are ready to go right out the gate. A few editorial changes would have been appreciated, there were a few instances of poor formatting and sometimes the layouts were not aligned to the center properly. There were some grammatical errors and a myriad of grammatical rules used, sometimes an Oxford comma was used, sometimes not, sometimes punctuation was inside quotation marks, sometimes not, but these issues with continuity are easy to overlook.
A lot of talent was brought together to make this product a success and, no matter what type of referee you are or what type of system you are playing, something can be found within these 58 adventures that is ready and ripe for your gaming table. 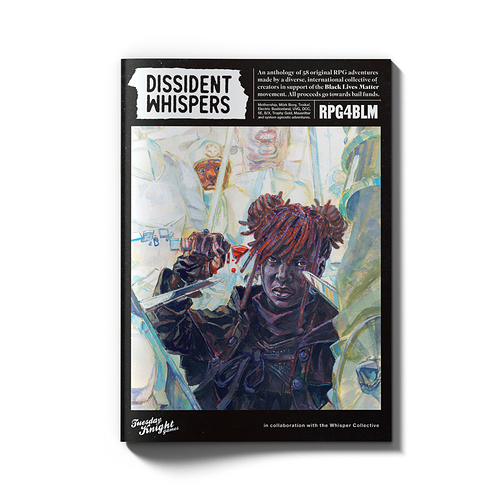 An anthology of 58 original two-page RPG adventures made by a diverse, international collective of creators in support of the Black Lives Matter movement. All proceeds go directly towards the National Bail Fund Network.

It’s a tricky one to review this, and you’ve done a good job. I bought this to support the fundraising that they were doing, to a deadline, so I’ll entirely excuse the rushed editing. However once some time’s past, it still needs reviewing on its own merit.

I suspect I’ll mostly use this book as inspiration rather than running any of the games directly. I absolutely concur on how striking it is, upon opening. It’s huge!