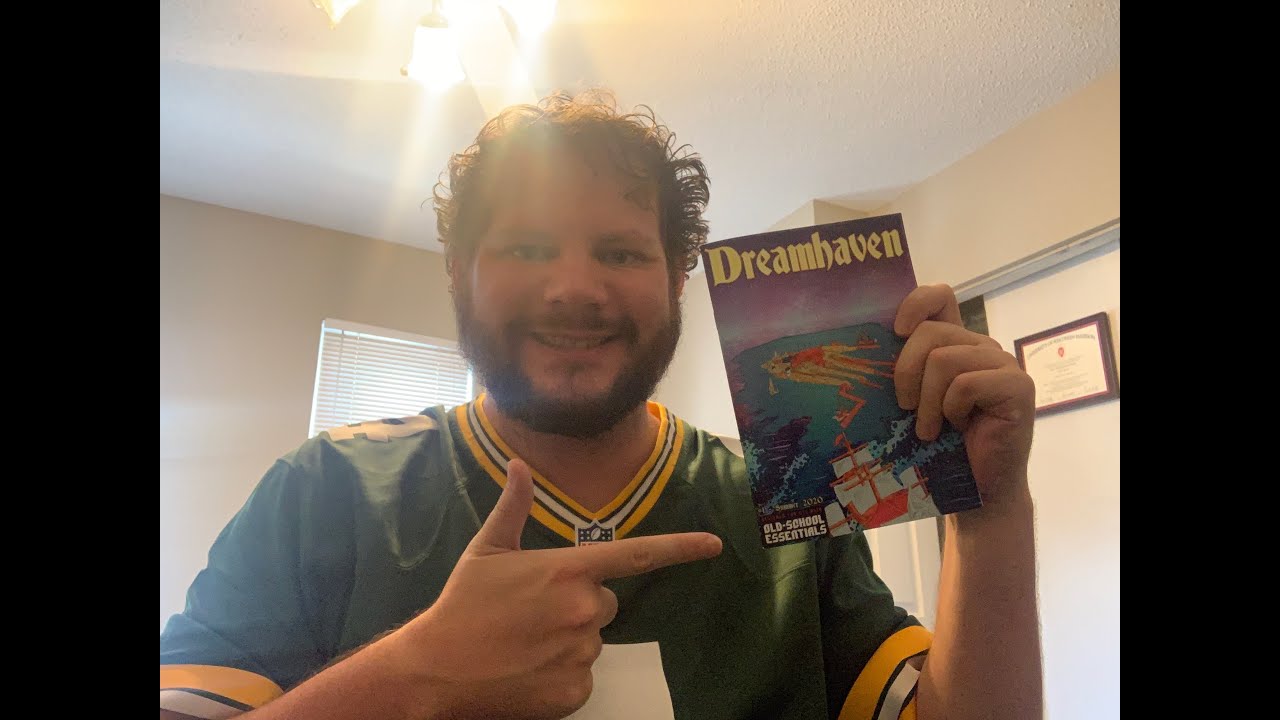 A small island upon the astral sea; crazy characters and unique environments; psionics rules, new classes and races; all this and more can be found within Dreamhaven - the inaugural zine recently renamed to Planar Compass as the authors didn’t get their Trademark request in in time. Overall, it’s a good effort. The adventures are interesting (if a bit railroady), the island is an interesting setting, the characters are memorable, and the included dungeon would be fun to run through. However, a setting too small for the scope of its adventures, complex rather than rules-light psionics, and a miss on copyediting hold this zine back.

A5 is the chosen size for this product, and it measures in at 60 pages including covers. The cover shows the island (named Dreamhaven), along with numbering indicating the first of a zine series, published in the summer of 2020. There is also the “Designed for Old-School Essentials” badge. The rear has a blurb that sets the stage, along with some more island artwork, along with the OSE books required for play. The rear interior cover is not well utilized, it is simply the Open Gaming License, which could have been included elsewhere to leverage the easy accessibility of the rear cover for something that is needed at a glance. As excellent for the OSR community as the OGL is, it’s never needed to flip to it right away. The front cover is similarly poorly leveraged - the only usable content here is a half page Table of Contents. The middle spread plops you halfway through the included dungeon.

The interior of the booklet is printed on glossy paper and leverages a mix of both black and white and color artwork. Thought was put into the layout and, outside of the OGL, no pages have text that continues on the next page. Spreads are largely self-contained, which is appreciated, especially when we get to the custom classes which, similarly to the OSE books Dreamhaven is emulating, has everything needed for the class side-by-side. The space is well utilized, except for the repeating of several monster statblocks such as the psiombie on pages 20 and 30.

Paging through the zine we see a lot within it: an introductory section, a description of the setting with some new races, eight keyed locations on the island, some adventures to take part in, tables which leverage a great blue color scheme, a dungeon, a randomized hedge maze with rules on how to progress, creature statblocks, artwork, classes, psionics rules, and a list of psionic powers. Throughout, there are numerous things that need fixing in the prose, such as a missing hyphen in “Old-School Essentials,” phrases like “as such” and “the cost” being repeated to the point of noticeability, and missing and misplaced commas and apostrophes.

While these issues are distracting, they’re not damning; however, there are a few fundamental issues with the content provided here as well. The island is very small - as mentioned only eight keyed locations - but the adventures are set up in a way that imply the world is larger than it actually is. Many of them rely on the, very few, notable NPCs not knowing each other. They are grandiose in stature, like they were designed for a massive city. For example, Saturday, one of the key NPCs in the zine, runs a group of thieving children that go around stealing from the residents of the island. Their hideout is in the docks, of which there are only a few piers. How is this going unnoticed? The only locations on the island with people to rob are the docks, a tavern, and a market the size of a ship’s hull. This isn’t a large place, but nobody seems to know anybody or any of the goings on. One of the adventures has the players looking for some thieves who have been robbing the proprietor of most important business on the island, Palio. When it leads to its conclusion of Saturday and her band of thieves it’s revealed that Palio and Saturday have an “agreement.” Did he not think to come here and ask her about the thefts, especially after being presented with evidence that someone in her band did it? Taken to a larger city these types of issues could be hand-waved away, but it would have been appreciated if adventures designed for this small locale were included instead.

There are a few usability issues with Dreamhaven as well. In the beginning of the zine on page five there’s a blurb of red text that reads, “As stated earlier, the following is intended for referees.” In actuality, there was no “as stated earlier,” which begs the question who is this zine for? Looking at the content it’s nearly all for referees outside of the additional classes and psionics rules in the back, but there is no text welcoming players back in and, if that content is truly designed for the players, why isn’t it at the beginning of the book so they can, as the red text demands, “stop reading [here]?” Why would they only be interested in reading a single page - the Introduction? For a zine so focused on a good layout, this seems like a strange oversight. Additionally on this page, the notes around the Celestial and Hedgemage [sic] are included but, if reading normally front-to-rear, there are many references to people and places that aren’t explained yet. They should instead be placed in the relevant sections of the booklet, such as in the Deepwarren dungeon.

The bestiary entries are also strangely placed. Rather than being in a self-contained section of the zine for easy reference, they’re interspersed throughout on off pages, sometimes relevant to what’s on the facing page, sometimes not. On closer inspection, these issues reveal a truth that is missed with only a cursory glance at Dreamhaven - the layout isn’t actually as good as it first appears to be. It cuts corners for a good end result at the cost of usability.

Overall, Dreamhaven is a good zine. The hedge maze is a standout. The psionics rules seem passable but a bit crunchy and very strong. For example, the powers of detect evil and detect magic effectively last forever with a maintenance cost of 1 point per 10 minutes. Starting characters have between 20 and 32 points and gain 10 + WIS mod points every level (although it’s a little unclear exactly how many points characters gain from the modifier as there seems to be a typo in the gaining a level rules - the rules say a WIS of 16 should grant 10 + 1 points, but the table above that statement indicates an ability score of 16 should have a modifier of +2). Either way, both these powers completely negate the cleric and magic-user versions of the spells as they take a whole level 1 or 2 spell slot and last only 20 minutes (or an hour for a cleric casting detect evil).

If one is looking to expand OSE’s repertoire of classes and abilities, this probably isn’t it. If one wants a cohesive small island setting with interconnected, sandbox adventures, this also probably isn’t it. However, if you’re looking for some cool ideas on an astral sea, some memorable NPCs, and an interesting dungeon to populate your own world with, you could do a lot worse than Dreamhaven. 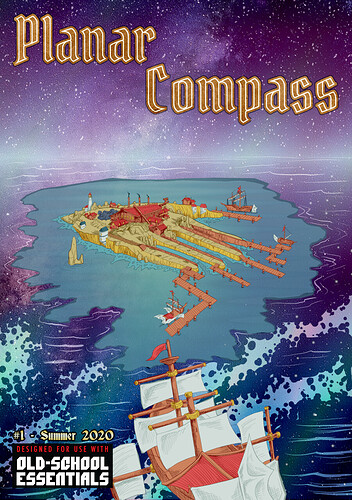 The big black. The sea of souls. The astral realm. There are many names for the space between the planes. In the center

Wonderful review and analysis of the zine, thanks for the great video!

Thanks for your honest and fair review. This was our first commercial product so we definitely made some mistakes and learned a lot in the process. I think you made a lot of really good points and we will work to address those in Issue 2.

Definitely looking forward to the second issue of Planar Compass! I think with a few tweaks your product is going to be top-tier, so I’m excited to see what is next in this series.

Thanks for dropping by! Please let us know when the next issue launches! It’s unfortunate about the name change but personally I think “Planar Compass” is a great name too so hopefully it doesn’t cause too much confusion in your marketing for the second release.

Definitely will do! Right now we are shooting to launch in early February.

We are settling in with the new name now as well.