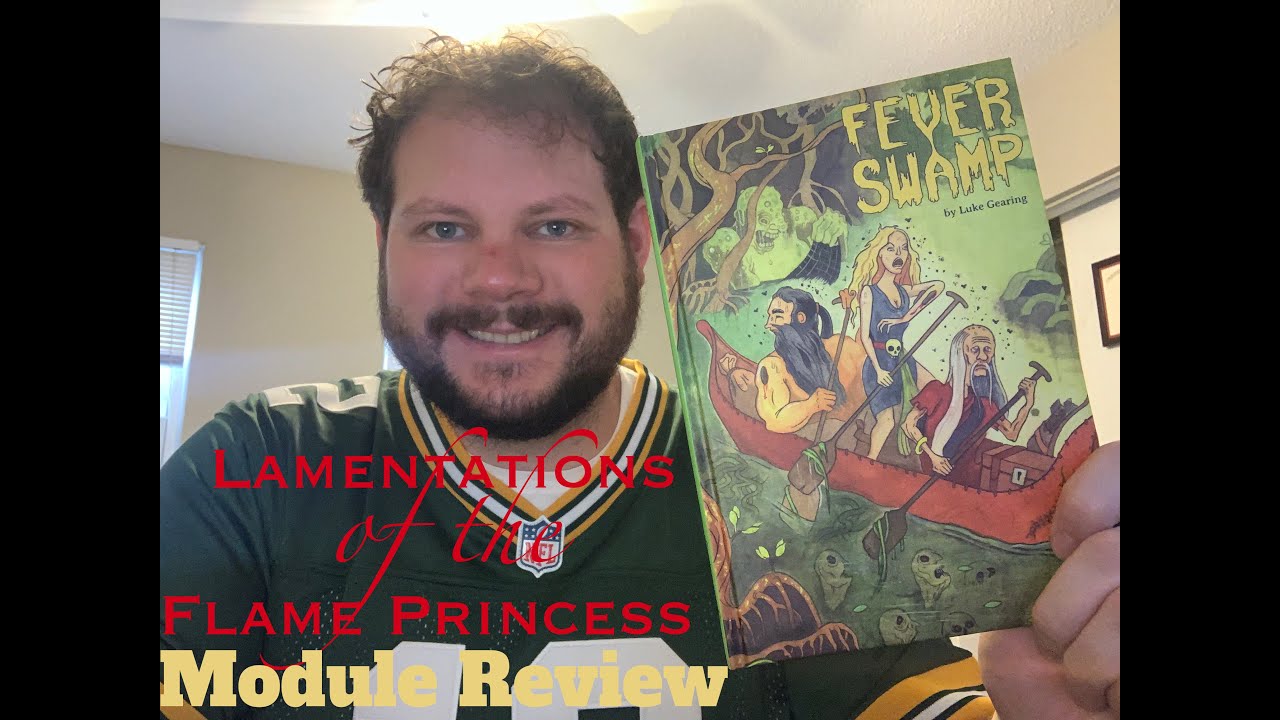 “The air is moist. The moisture mixes with your sweat - the heat is relentless. The drone of insects gives you headaches, and the fever from the infected wounds has left you delirious. Your raft is damaged, and there are spirits in the trees. You’ve only been here for three days. ”

An unassuming little book from Melsonian Arts Council written by Luke Gearing. The rear passage certainly gets the creative juices flowing, painting a grotesque picture of a fetid place. The front artwork continues this trend, showing a party of three in a ramshackle canoe succumbing to the horrors of this awful environment. The inside has more of the same; any referee looking for a desolate fen that only knows despair need look no further than Fever Swamp.

The first thing one notes upon picking up this module is the quality of the printing. It’s hardcover and feels solid in the hand. The interior paper, heavy, with good texture and green outlines of plants swimming within. The binding, stitched with thread and securely glued. Extreme care was obviously placed here to ensure the product delivered will last a long time. The interior covers are printed in color and showcase a red and green theme. The front, a quick reference map of keyed locations within the swamp, offset by a short set of credits and an encounter table. The rear, a table containing the diseases of the swamp, offset by the rules for infection, swamp miasma, and the sinking of boats. Fantastic. While running this module these were the things I used most often, having them easily available and quick to flip to was an excellent design choice.

The interior of the module starts with a page dedicated to copyright and a table of contents, the only areas of this book not fully utilized, then dives right in with a few hooks and, oddly enough, a repeat of the encounter table we just saw on the few pages prior. While the hex map of the swamp is also repeated a few more pages in, it’s done with good artistic effect. The choice to repeat the encounter table in a book that’s already quite sparse in page count content is a strange one indeed.

This is the main issue with Fever Swamp. What’s within is good, but there’s not a lot of it. Granted, there’s enough for a group to spend numerous sessions exploring, but a lot will need to be powered by referee improvisation. Hooks, teasers, ideas, that’s what one will find here - similar to the flavor text on the rear of the module. For example, on pages 4 and 5, we have two of the twenty-six pages (twenty-four if you don’t count the table of contents and copyright pages, back to twenty-six if you count the interior covers) devoted to the inhabitants of the swamp known as “The People.” There’s flavor text, explanations on their shamanistic ways, and a table to generate their eccentricities. These groups are not encountered in any numbered tile - the only way to encounter them is on a roll of either 4 or 5 on the random encounter table - so what could be a great tool used to empower this swamp may never actually be used while taking up 7% of the content of this module. If the referee simply uses what’s contained in this book to flesh out their own vision of the swamp, the tools contained within are highly usable; however, for-on-the-fly refereeing, the ask is a bit much. Fever Swamp even recommends pre-rolling six tribes minimum to populate the swamp, a lot of prep work for something that may never be encountered.

Continuing on, we get to the numbered hexes, starting with the only town in the swamp - the village of Clink. Here there are five named NPCs out of a population of fifty-four. No map, or real description of the location is provided, outside of “a collection of…shoddy wooden structures supported by stilts to keep them out of the stinking waters of the swamp,” the rest is left up to the referee to create.

The next few pages depict the only keyed dungeon in the module. At eight rooms it’s not huge, and it’s fairly linear in design. It also has what is essentially a kill-switch, an expensive ivory pillar that, if removed, makes the whole dungeon collapse, in one of the first rooms, meaning that players may not actually be able to explore much of the dungeon at all. This normally wouldn’t necessarily be a negative; however, noting the page count again, this dungeon is five of the twenty-six pages, so nearly 20% of this module can destroy itself within less than ten minutes of exploration.

The rest of Fever Swamp is laid out quite logically. Keyed locations from the hex map are laid out one after the other in order in the subsequent pages. Each location is self-contained on an individual page, usually with a few others, and the page number is noted on the interior front cover for easy reference so no matter where the players go you can flip directly to the associated page. Many of these locations are mere snip-its containing only cursory information and need to be fleshed out by the referee. Examples being Grandfather Rotte, the godling of the swamp who will awaken if something damages it’s domain. References to the godling are sparsely populated throughout the module, but nothing that would awaken him - that would have to be left to improvisation. The Wasser Koenig, with no map or description outside of a few words and a picture that doesn’t quite match. A succubus with no statblock; a few ruins, that could have been turned into fully-fledged dungeons, with no maps.

After the keyed locations the book has two custom classes. The first, the Transfiguration Host, can be found living with The People described earlier in the module. It’s essentially a living host for a worm, which evolves slowly as it levels up. The second, the Shaman, is a remix of the Cleric class from Lamentations of the Flame Princess, with a few d6 tweaks that you roll on level-up. Finally are the monster statblocks, a bit more artwork, and a description of The Corpse Pile, a central mass of corpses that wanders the swamp and adjusts the random encounter table. Unfortunately, neither encounter table mentions the corpse pile specifically, which is a shame, as it can drastically change the outcomes of what the players encounter in the swamp and it’s located at the very end of the module.

Fever Swamp is, overall, an excellent addition to one’s OSR collection of supplements. It can function as a by-the-hip improvisational module for an experienced referee, but will take some significant prep work for those less comfortable with that style of play. It works best as a toolkit, leveraging what is inside to build out one’s own swamp and its denizens. It does have issue with length and the usability of those pages included. Within twenty-six pages you have four devoted to character classes, one that’s a repeat of the encounter table, two devoted to copyright and contents, two devoted to inhabitants that may never appear, and five encompassing a dungeon that can explode if the players touch the wrong thing - fourteen pages total, or over half the content of this module. This may seem a strange thing to harp on, until you get to the price. Fever Swamp clocks in at $27 - that’s over a dollar a page for this exquisitely printed, yet expensive book - plus shipping and handling. 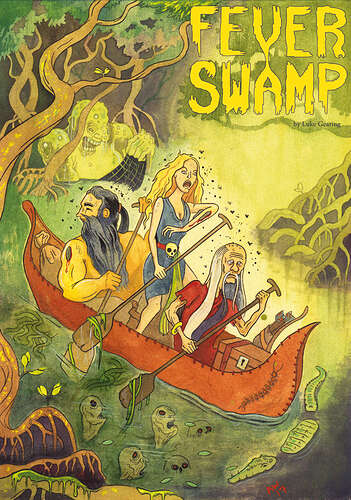 The air is moist. The moisture mixes with your sweat — the heat is relentless. The drone of insects gives you head 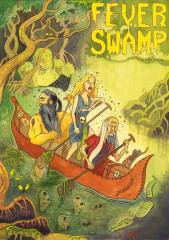 Well worth it in print in my opinion. Very nicely built and the colors really pop. Super light as well - which I think serves it nicely. Reminds me of the construction of Winter’s Daughter.