I'm in another kind of OSR games 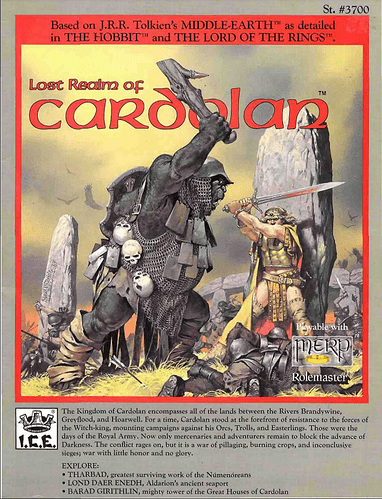 I’ve always been in love with some other old school games, like the Iron Crown’s Enterprise (ICE) Rolemaster/MERP games. I think this is old school too, because the need of more realistic feeling and less “gamy” rules have been wanted by old school gamers from the beginning, even before 1980.

I really like the feeling of this kind of games, the perceived realism, but always heroic. We play this games at the opposite scope from D&D (Runequest, Rolemaster, MERP and the like) but with the same spirit because they share the same hobby roots.

I haven’t played them, but does Runequest and MERP use d100 skill based systems? I think percentile rolls and skills both bring a feeling of realism. I also like how a character is defined by what skills they have. It’d be cool to play in a game like that.

I’m playing in a MERP game at the moment which is definitely old school (I don’t know if you’ve seen Against the Darkmaster which is a more recent take on MERP). I wouldn’t class them as OSR though, just old school which is fine with me…

You’re right, it’s old school, but because it’s not D&D, it’s not in the OSR movement because this games are already a departure from early D&D. And OSR is all about D&D, and really not the other games from the same period.

They are d100 systems like Runequest, except than in Rolemaster/MERP, you need to roll a d100 and adding your skill bonus, rather than rolling under your skills. And for some actions (long or complex movement actions like climbing, or for precise actions like combat and magic) you look the result on a table.

They are really different because they tend to use many skills (and in d100 games like Runequest or Rolemaster, all actions are skill relevant), and because they have (specially Rolemaster) a simple input and a very varied and detailed output. Combat ? Just roll 1d100 + skill - enemy defense, look at the weapon table (and maybe the critical table) and your obtain, in one or two rolls, the impact of the blow, the localization (from the critical), eventually bleeds, stuns, precise wounds effects and a myriad of other things. Just in 2 rolls. For comparison, in D&D you roll to hit and to damage and the result is only “He lost 3 hp”. So… different kind of games, really

Good summary and comparison. I’m not a fan of 5e, but I run quite a bit of old school D&D, OSE and the like and I love the abstraction - combat is fast and deadly (certainly at lower levels) and it’s easy to fill the spaces the rules don’t account for. With MERP there’s a grittiness that is very appealing, it’s fantastic when a good roll takes out a big bad… we’re just waiting for the GM to make a similarly good roll…

I only played Rolemaster once back in the day and it seemed incredibly convoluted even by the standard of the late 80’s, although I do have friends who still love it… MERP is at the upper end of my crunch tolerance, but that aside is a great game.

I’m recently getting into Rolemaster and MERP. They’re both great games, though no one has idea when Rolemaster Unified will be released. I’d consider them OSR-adjacent like Traveller though.

If you love MERP, I strongly recommend Against the Darkmaster which is more than a retroclone: it adds elements like the character’s drives and passion, resolves the “stun lock” issue in combat, rebalances many of the rules, it adds new mechanics for the travelling and the system of the Safe Havens. VsD tries to stay faithful when needed while discarding what it was considered boring in the original MERP.

I had the chance to interview the authors, Massimiliano Caracristi and Nikola Segoloni. They’re both awesome people and super available to arrange demos on Discord.

I’m a fan of VsD, it’s really a great game, and a great iteration of MERP

I still prefer Rolemaster because of the character precision (lot of skills) and the weapon tables with to many results. And because Rolemaster is in my native language (I’m french) but… If I want to pick MERP at this time, I’ll pick VsD. And yes, the VsD authors are awesome

I don’t really like RMU because it’s like Rolemaster 2nd with a loss of granularity in skills costs and precision in combat tables. And granularity, precision and variety are the major Rolemaster strengths because they create this perceived realism ^^

I think the OSR (or the old school scene, or whatever name we want to use) has room for many kinds of games. There are always games that don’t fit the definition, but as long as the people who play the games find common ground, the community should/will expand to those new directions.

Against the Darkmaster sounds cool (that name!), I should maybe take a look one day.

OSR as D&D would include, as my WHITEFRANK does, elements from the Californian and original Minnesota style of play though. That is before the AD&D rules and before levels- they only added levels in a coherent way at the second step. Going from the original step, it was wide open. Looked at in that way MERP and RuneQuest (original version based on the board game) still had matrix tables the same as MIDGARD, WARLOCK, BROWNSTONE and one of the first non-Arneson BLACKMOOR days

And hopefully a very welcoming one! I think it is. 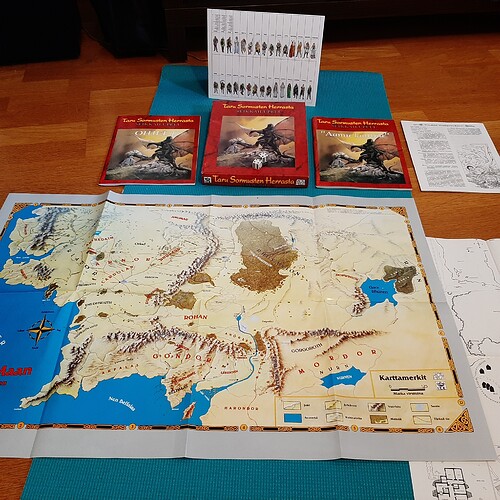 Lord of the Rings Adventure Game boxed set in Finnish. It seems to still be in print here!

The rule booklet implies you should graduate to MERP after learning the ropes, but it’s actually a pretty nice little system in its own right. 2d6 + bonuses vs target number for non combat actions, plus automatic successes when it makes sense.

Combat uses rolling 2d6 + attack bonus - opponent’s defense bonus. You look up the result on a simple matrix. You either do a few points of damage, OR you knock them out immediately or kill them.

I find it pretty cool: you have high HP values (fresh PCs have 30-60) but average hits don’t do that much damage. But, any hit could result in a knockout or worse, so you can’t rely on your high HP too much. If a battle lasts for a long time, eventually someone gets knocked out and there’s a swift end! 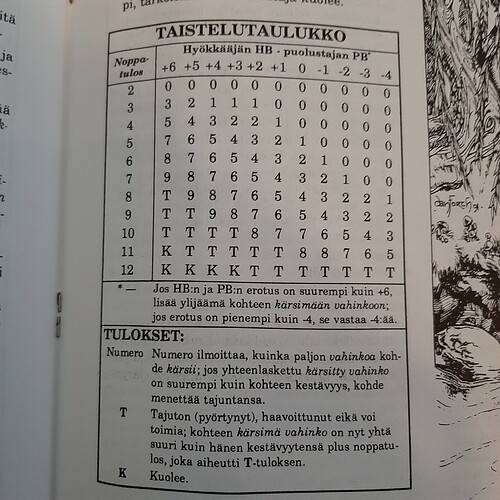 Combat matrix. Number is damage. T is knocked out, K is dead. HB is attack bonus, PB is defense bonus.

The spells aren’t very imaginative, they give bonuses to specific actions. But, you take damage for every successful spell you cast, and the bigger the spell, the bigger the damage to caster. 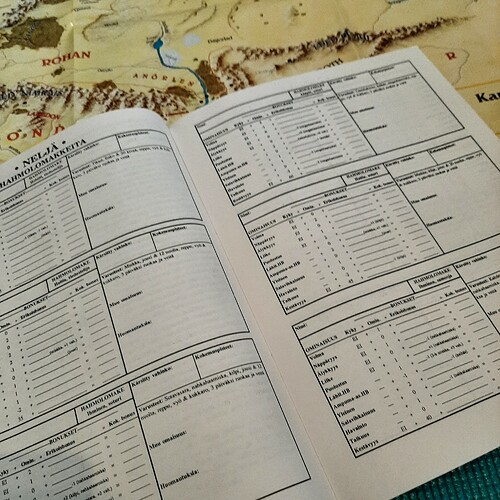 I like these mini character sheets, one for each race/class combo. You pick an archetype (human warrior or ranger or bard, hobbit scout…), and distribute six +1 bonuses between six skills. Up to +3 per skill, and any skills without a bonus get a -2. Very travelleresque!

I haven’t looked at the adventure yet, its about 60 pages, as I just bought this today (25€, not bad). It also comes with cardboard miniatures with plastic stands.

It’s an interesting system. There are two free variants of it out there that I’m aware of, but have yet to try: