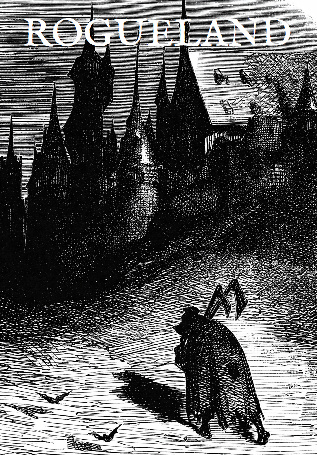 There is a lot to unpack in these 40 pages. Written by @CavernsofHeresy and filled out with an excellent roster of artists, this one beckons to be flipped through. Inspired by Knave and Ars Magica with nods to NetHack, Wizardry and Zork, this is a fantasy system with player-facing, roll high, d20 mechanics. It attempts to add some dynamism to the Knave-inspired magic system and incorporates a wide array of tools for the mechanics of adventuring.

I want to mention visuals first; there is quite a bit here and of high quality. Herein you will find fantastic illustrations by:

@LF_OSR eschews typical line/hatch work for a textured pointillism to create a wonderful body of work that manages to be quite enigmatic and evocative – safe to say a favorite artist of many and several quality pieces on display herein.

@gnarledmonster is the creator of the recently released, highly praised Beyond the Borderlands, and also an artist with an energized cartoon style that is fluid and jumps off the page – apparently an inspired mind that never stops working!

@HodagRPG is perhaps the most traditional “old-school” artist on display. Their work here is an interesting aerial hex map view, like a bird flying past a region! Though not included in the book, I’m particularly fond of their action scenes – such great character and detail.

@the.subterranean.ocean.survey has created some excellent maps and hex art for Rogueland. Their other work is stunning; whenever I see a new post of the obsessive, line-packed work, especially the raw notebook photos, I am instantly inspired!

@davidpglass has made the two dungeon maps included at the end of the book. I’m new to this artist’s work, but they are clean, well done, and display a great command of line. I particularly like the “rubble” and stippling in the second cavern map.

What a team! Additionally, Caverns has shown their intuition with the cover. Just one of the best pieces of game art I know. It may be Domain, but yes, anyone seeing this cover is likely to be instantly hooked. Such a smart selection.

I realize that was a lot of potentially divergent material, but really, artists convey these things in their packaged state, and Caverns has put together an all-star cast here. This is what I love about the small gaming scene. Weird, unique and quality art is so often used, and it inspires my imagination.

Next is “Pack Your Own Bag.” I suppose previously I hadn’t quite registered the freedom implicit in this part of character creation. I always see Starting Gear tables to roll on as if “that’s the rule” but when I read this header in Rogueland, I thought: “Hmmm, I am an adventurer in a gear shed with all this stuff strewn about, ready to head out for some crazy new life. What do I throw in my duffle?” Even though structured as d20 random tables the tagline just opened up the role-playing mindset. Obvious and trivial? Yes, but some readers may be new to gaming and I just wanted to mention this small touch. Speaking of new players, Rogueland has a nice selection of pre-packaged characters to rush things along.

Traits: roll d20 on 10 different tables describing physical to psychological traits. Things we’ve seen before. I do like the layout of this though. They are aligned columns of text, so rolling across facilitates creation of a Tag Phrase quite easily for your character. Roll each column and read across for Vice, Virtue, Misery, Past . Some of my examples:

Bitter old man who was Humble(d) by his Exile(d) . Will use Tracker skills to find the vile beast that ruined the local shrine in attempts to regain community standing… 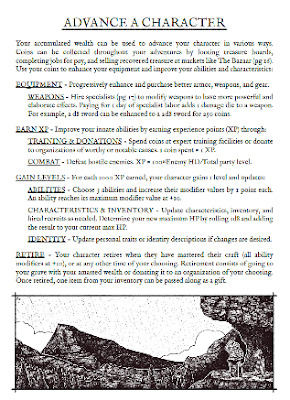 Rolling a d20 plus or minus bonuses, trying to exceed difficulty level. Same for combat with Ascending Armor. The game utilizes a universal Usage Die mechanic. Torches, spikes, and arrows all use the same supply chain. Start with Ud20 and no matter if oil or arrows was used, roll UD. Acquire a bundle of something, increase UD by one link. I quite like this as it keeps the drama of UD resource management without the bookkeeping of numerous Usage for each item.

Rogueland lays out some nice Advancement rules, including gaining XP through donation to worthy causes. There is a neat rule for paying to upgrade your weapon damage die; finding a good weaponsmith can turn your d6 dagger into a 2d6 dagger!

Anyone can cast magic. If a player has a wand, spellbook, rune, etc., it can be used once a day, and those magical items take up inventory slots. If using level-based spells from external game sources, a character can only cast a spell less than or equal to their level. Rogueland includes a list of 100 level-less spells.

However, there is Rogue Magic, which I take is the implied natural form in the world. There are magical scrolls that hold free-form power which differs from traditional magic. When a scroll is found, this unpredictable power is “detected” randomly from a 2d12 table of “Actions” performed on “Objects.” Magic is cast directly from a scroll as the detected effect or can be used as pure energy for direct damage or healing. Once used for any of these options, the scroll is destroyed.

Rogue Magicians (not a technical class, but an identity) may choose the practice of “Attuning” items with a scroll’s effects. This action requires a WIS test, and if successful, the scroll burns up and transfers its power to your chosen item. On a failed test, the scroll burns up and causes the magician damage. Unlike the scroll’s automatic destruction upon use, an attuned item only has a 1-in-6 chance of losing its attunement and being destroyed.

This was one of those things that is so simple it seemed complicated at first. It’s actually an elegant mechanic that allows for some interesting game narrative. The first thing that comes to mind is playing a character who collects the elusive scroll magic and creates rare “arcane objects” to sell. There does not seem to be rules about limitations in stacking attunements. I am sure this will get hacked with future tables of effects, and Rogue Magicians will become prevalent members of the world, vying for those perfectly combined scroll effects, and constructing wildly powerful objects.

As cool as it is, it seems slightly superficial as written. I think a penalty for detection, much like attunement, would have been appropriate, making these wild and mysterious papers almost always hazardous. It’s likely just me, but it seems for all the attuning and rolling effects and risky damage and scrolls burning away, the powers are not so different from other Traditional Magic. They cause effects to objects, and some results may be quirky or narratively awkward, but not damaging in many ways. I wonder if Rogue Magicians could go one step further and modify the attunement, perhaps picking and choosing effects and objects (at a high cost of course.) A GM can tune this however they choose. I have not played this yet and these initial impressions are just that – thinking aloud. Even as I write, my mind is wrapping and warping around the potential for Rogue Magicians and how it could all be rather dangerous…

The Rogue Magic table lends itself to some potentially strange and fun moments. Here are some results for magical effects: 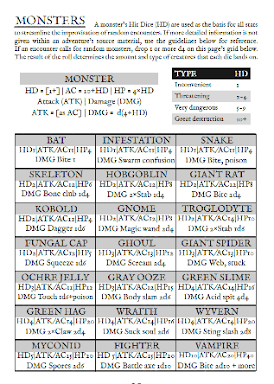 Excellent material here! Rogueland contains something not too many small games include – mechanics and tables for generative hex exploration. Broken down into clear steps and actions, travel play can easily be facilitated. There are rules for Mishaps, Events, Hunting, Food/water. There is a page of tables devoted to Open World discovery and a page of mechanics for closer detailed discovery, including an “unknown” room generator. Things I have seen on crawling/exploring are often dense with tables, percentages, and many minutiae. In contrast, this section of Rogueland is so clear and mechanically simple to follow, that I wish I had this game when I first started playing. I often see posts online of players asking how to properly hex crawl, explore and so on. I have seen tables and tables of narrative options in small books, but not too much with these basic core elements to gaming. Additionally, these kinds of tools built into a rules-lite system makes it an excellent choice for solitaire gaming. With this booklet, and a good oracle system, much GM-less play can happen. Very cool!

The book ends with a series of six locales and two dungeons. The adventure sites have evocative single paragraphs, and each are accompanied by an illustrated hex map. A player could print out a copy of the large map at the front of the book, which has full geography and small icons representing various “sites,” though unlabeled, and begin play by populating it with these pre-generated locations. The “Roguelands” therefore become different for each table, and though I have not tried it yet, some color pencils may further customize the map. There are also two dungeons with descriptions, encounter tables and traps. Again, this is the author trying to give as much momentum to players as possible within a small format.

The final pages are condensed reference pages with exploration rules, which printed out and laminated would make nice additions to a game tools binder.

With all the great visuals on display, I find myself wishing the character sheet were a little more evocative. It is practical and clear but perhaps could have been a final flourish to further increase setting vibes and close out its tasteful artistic direction – this being completely subjective, others may prefer the stock sheet for its user friendliness and lack of pretention.

Rogueland is a great package. We have seen this essential system before, but this work is advancing the conversation in yet another slight way; the heart of osr hacking! What sets this book apart is the whole approach, starting with the aesthetics. Though a booklet and “rules-lite,” the author made sure to put seriousness and gravity behind the project by using some of the finest artists working. Coupled with a clean and easy layout, it is relatively substantial. I much prefer tactile, so I anxiously await my physical copy to see how this translates to hand. The book enhances this ambition to be taken seriously by giving players useable tools and mechanics for travel & exploration gameplay. I would suggest to new players curious about getting into “osr style” gaming that this would make an excellent entry point. You can have a nicely made product for a good price that also manages to be easy to use while expanding play rules beyond attributes, combat, and spellcasting. Speaking of which, Rogueland seeks to add a new angle on simple magic systems with “Attunements” and an alternative approach to free-form magic use. I see this being a lot of fun, trying to make whatever strange combination a scroll may reveal applicable in a desperate situation! I’m excited to work more with this book and as with some of the other great indie products, I await the interesting takes and additions that bolster Rogueland.