Continuing the discussion from The 1980s Satanic Panic:

After reading about the magic system of Dragonraid in The 1980s Satanic Panic, I was thinking in creating a game with a similar magic system, where is the player to know and recite the spell, not the character.

Kernelinyellow, such a game could (should?) dispense with INT and WIS scores, in my view. At a certain point, it’s the player who “knows the spells,” not the character, just as the player “knows how to search (describe searching) for hidden objects.”

This is something I would like to include in my game. I’m not sure about removing the “search” skill from the character sheet, though, because it is something different, given that characters probably have a different life experience and skillset than players (while, regarding magic, everything is made up and thus the “experience” of the character is in fact identical to the one of the player).

In fact, I’d base such a system on words, like the two described here:

I love GLOG magic but I wanted a system that less rigid and mundane. Come generate some new spells!

Any other ideas or resources I could consult for creating such a game?

About the search skill: My system, which lacks intellectual stats, does have traits representing things characters are good at. Alertness is one of them, and that contributes to searching. So does Second Sight (for invisible things, secret doors, and the like). But there is not a stat for Intelligence. That’s represented by individual traits. A woodsman is “smart” at survival whereas an alchemist is “smart” at identifying potions, to give two examples.

For word-based magic systems, there is Ars Magica’s system as the model. This was the first successful magic system using the verb-noun approach. It came out in 1987. I played it for a year or so in college and the system worked. This was not really a memory-based system, though. So I’d like to distinguish between memory systems and word-based systems (which can overlap).

Also, do the players need to pronounce the words correctly? What is the leeway of error in pronunciation? Who will teach them to pronounce sounds that they do not know natively? Where does mispronouncing verge into just getting it wrong?

I’m still brainstorming on this.

Here’s my old Magic Words post from 2015 that might give you some more ideas for words (and a handy online perchance generator here).

I have a semi-similar system that uses Scrabble Tiles to cast “spells” in The Cunning Class I wrote for Whitehack, which could ostensibly be considered a “teaching” tool. I like that it’s prop based too

Brigandyne is a Warhammer-like system published in 2014 in which each spell has an associated formula, presented as a short rhyme. Recitation is strongly encouraged because it gives a bonus to spellcasting, which is doubled if the player uses an appropriately grandiose tone. It’s not mandatory though, but most players do it for the bonus, and it helps setting the mood. 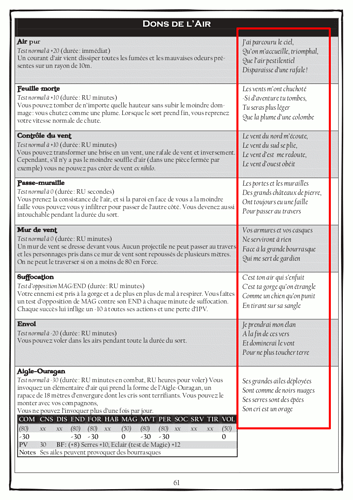 ktrey, did you get to try your Magic Words? I mean in the game, not in real life! Did players use it with you? What was the result: chaos or beauty? Or both?

I’ve used this system and variations a few times over the years, with a few different bases (B/X, Whitehack, etc).

It’s fun, but it does require a degree of negotiation that isn’t normally present in traditional, codified Spell List, games. It relies very heavily on Player Skill and Creative application/interpretation of the Words and what they “mean” so it might not work out for all tables, but I found it fun to see players think on their feet and come up with unusual solutions to problems that relied on “their words.”

Sean, I just downloaded your Quarrel & Fable. Thanks for mentioning it, or I would not have heard of it. It looks good, containing a lot of things I like, all bundled together (especially the FF base). Do you know of other FF hacks, besides Troika? My system is not so unlike this one, sprouting from the FF bough of the Tunnels & Trolls branch of fantasy gaming.

There’s a second edition of Advanced Fighting Fantasy put out by Arion Games which has the official descendent lisence, though there’s mostly just supplemental detail rather than new rules development.

Thanks, Sean. Here in the US, AFF1e was not really seen. I never saw it and I thought I knew all the games from that period. Anyway, I got Arion’s AFF2e to run games for my kids. Frankly, it was disappointing in editing, organization, and other things you want a book you pay for to have. But it inspired me. I just found Echoes of the Labyrinth, too! Thanks again.

Please everybody stop being shy! If you made something cool (or even if your friends did, or you don’t really think that is cool) which is rules-compliant and relevant to the discussion, just link it. It will add to the discussion at hand and we will be happy to read it.