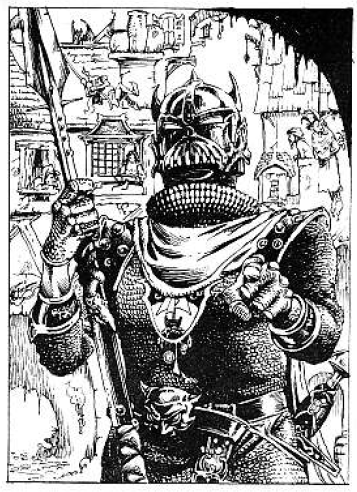 I’ll occasionally overlay a Voronoi Diagram on City maps to provide some rough guidelines to associate with neighborhoods/quarters/districts and help adjudicate travel times between “nodes” (a key landmark/feature, akin to point-crawling). Characterizing these “neighborhoods” with some interesting smells or other bit of dressing can work wonders for making areas more memorable (and assist with player “navigation” later). I prefer them to rigid grids/hex maps because of their organic nature.

Guides are also crucial in most of the larger urban sprawls in order to uncover these “nodes.” Locals will know the city far better than a visitor ever will, and can help reduce the travel time (and any procedural checks/resource consumption) that takes place between nodes. 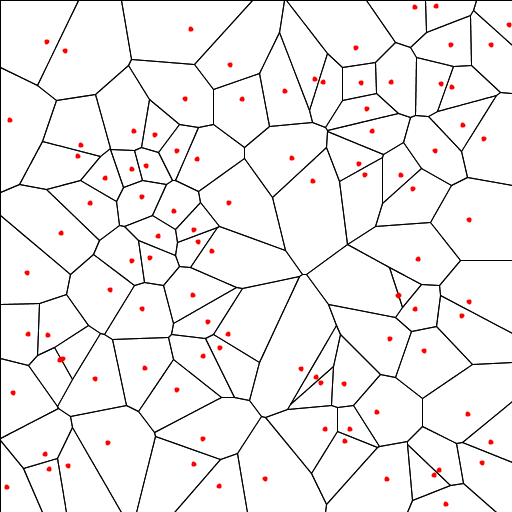 Woah that looks really neat. How does the Voronoi Diagram map travel times? Is it that each of those regions is one move (i.e. abstract unit of time or space) away? And I agree about giving distinct neighborhoods distinct smells and sounds, and I would add also one or two sentences to characterize the feel of the buildings and streets. That table of smells you linked to is to die for–amazing!

Each “polygon” is roughly an abstracted “City-turn” (enough to trigger procedural checks on Encounter/Events Tables, so one “move” as you say

). This means smaller ones are generally more dense, potentially with confusing/meandering streets or hostile, misleading signage (or even an utter lack thereof).

Usually this is about an hour or so of travel for the larger metropoleis, but nailing down precise times tends to only really comes up with Heists/Evasion/Pursuit or eyeballing things for the purposes of quotes from guides or if someone bothers to “ask for directions.” If the fastest way from node A to node B is 4 nodes away, then I at least have a starting point for the number of checks we’ll need.

I definitely agree that Architecture can convey a ton of character for a neighborhood. I like my Cities to “age inward” with the oldest bits radiating from the center, but I always try to sprinkle in the occasional distinct culture here and there that has flourished within a neighborhood to capture a really cosmopolitan feel, utterly different tongues/songs being heard in the streets, eye-catching colors and clothing styles, and unusual wares and customs from foreign lands are great ways to showcase some of a Cities hidden secrets for the diligent explorer.

Giving players are reason to “revisit” a region of the City, even when just passing through is a good way to insure that there are plenty of baited hooks for something more sandboxy

Thanks for the kind words about my Smell Table! I hope it brings you some fun and inspiration! We sometimes neglect the nose, favoring visual description…but aroma can be highly evocative of a time/place and forge really persistent memories. My goal is always to try and convey these scents so well that players “know where they are” just based on the odors wafting down from windows

Multiple ‘Old Sectors’ are possible when nearby polities are absorbed or merge in their outward growth.
Weirder, but possible in a fantasitical setting are, Old Things, which devour neighbourhoods and convert their architecture into the older (more Gothic or simply decrepit) styles.

I love it! What a great idea. Architecture that spreads like a virus. It reminds me of furniture pox in my dreamlands game (it’s the next issue of the zine), where the patterns from furniture or wallpaper in once opulent decrepit noble houses spreads across surface, and onto the skin of furniture thieves and antique dealers.

“Stop that man, Constable!”
“Why?”
“I can tell by that mark he’s the one who stole my grand aunt Matilda’s roll-top desk!”
“Alright you!”
A luncheon wif a Truncheon

Forms of evidence unknown in the waking world. Of course, the gold standard in Zyan is the testimony of the cats!

Hear! Hear! and well it should be!

This is very close to the system I’ve set up in my Necropolis game! Convergent revolution

To be fair, it was influenced by your pointcrawl technique, particularly “discoveries”. So influence as well as convergence!