In most Sword & Sorcery OSRs, Magic is thematically considered rare but powerful and terrifying.
But unfortunately this thematic direction/convention is rarely correlated with the game’s mechanics/rules.

Spells are still ordered by Levels with the amount of charges a magic-user can cast is effected by his/her XP Level. And when spells are being cast in front of others (regular humans/non magic-users),
it usually has no mechanical side-effects on them.

Here’s a list of optional rules and considerations i am currently tinkering with, in order to connect this thematic approach more tightly with the system itself.

​​► Casting a spell costs HP equal to its level - A level 2 spell costs 2 HPs.​​
► When a spell is cast, all non-magic users who experience the casting roll a Wisdom check.
​​► Failing gives Sanity Points equal to the spell’s level - A level 2 spell afflicts 2 Sanity Points.
► Magic-Users can cast from spell levels that are equal and below their overall spell charges.
For example: A level 3 Magic-User can cast a single level 3 spell or three level 1 spells.
► Healing spells cost HP, but when cast on self they have an increased effect.​​
► Casting a spell in public can cause horrific public results such as Mob lynching etc.
► Casting a spell discreetly, requires a successful DEX check.​​
► All Magic-Users cannot wear armor that reduces DEX in any way.​​

► Trauma is afflicted once a character’s accumulated Sanity Points exceeds its Wisdom stat.​​
► Once Trauma is afflicted the player will roll on the Trauma table.​​
► The Trauma table can give PCs a temporary and/or a permanent effect.​​
► Each Trauma effect will relate to either a stat element or a thematic personality element.
► Some results on the table will refer/tell the player to roll on the Madness table.​​
► Traumas can be cured only by a Ritual done by a Shaman/Cleric.​​
► A Shaman/Cleric cannot perform the ritual on him/her selves.
► A Ritual will work only if the PC shares the same religion as the Shaman/Cleric that performs it.​

Would love to get your feedback on this.

I like the idea here, I think it would fit well with eldritch magics especially, although I do think it wouldn’t be very much fun being a magic user with this system unless they were buffed in some other way like spells do much more than they already do in an OSR setting or their martial prowess is increased.

If this type of magic was a supplement to rather than a replacement for existing magic (e.g. the above eldritch magics) I think it could slide in just fine.

One thing you could do is instead of having spell levels, just make all spells scale with the amount of power (or mana or whatever) that the magic-user invests in it. So rather than having a firebolt, burning hands and fireball spell at different levels, just have a spell called “FIRE” that deals Xd6 damage, X being the amount of power.

Some spells might have a minimum amount of power required, but that’s up to the designer.

Thank you very much

Yes, i agree.
Basically most if not all the “Magic” in Sword & Sorcery settings has some Eldritch/Cosmic/Weird background to it. Something a human being was not meant to understand let alone use or perform.
And because of that in my opinion, casting these “Spells” should have both a thematic and mechanical side effects that can give the game play a experience the feel that “Magic” is powerful and terrifying.
Something that you should use only when necessary and with the knowledge of what the cost might be.

I think that it is an optional approach, that a GM can defiantly use in any why he/she will see fit.

I think that by enabling Magic-Users to cast spells from higher level early in the XP levels, presents this Lethality approach and the experience that Magic-Users are much more powerful then other human beings, but for a dangerous price.

I didn’t want to go to changing the spells themselves or make the Magic system too far off from the original version because that makes it slightly less approachable and understandable.

I have a somewhat similar idea for 4E powers before, putting HP costs in them. And one of the things I have people who tries and runs it is whether they allow powers or spells be cast even if the HP cost will kill them, or they are not allowed to cast any spells that HP costs is higher than their current HP.

For Trauma, do you plan to put a certain limit before they become too dysfunctional to be played as PC? One idea you could try is tying it with your abilities (not sure if you’re still using the 6 stats or a variation of them). So 1 Trauma affects one ability, and you can only gain 1 Trauma per ability. Once all your abilities get a Trauma (or maybe getting more than half of total # of ability stats?), the PC becomes an NPC or retires, depends on how you treat it.

I like the overall idea, but I would probably tweak it for usage in my own games.

I was thinking about all those suggestions about making it less punishing for Magic Users, but then I remembered this post by Pjotr Frank and decided it could get both worse and funnier at the same time, by simply adding that every time you roll on the Trauma table you have to get save on Wisdom or becoming addicted to Magic (which means to getting Sanity Points), and making Magic Users roll as anybody else.

What was the emotional experience that you wanted to achieve with your Hack?

For Trauma, i was thinking of not limiting it at all, because by not treating your PC’s Traumas you increase the chance to die/seriously fail or let others die. PCs are encouraged to get rid of their Traumas with Cleric/Shaman rituals in order to sustain themselves for the long run.

In case, a PC wont treat his/her Traumas he will get weirder and eventually a liability that maybe his/her team mate wont be able to carry anymore - which i think is great because it might create interesting dramatic situations in the team.

Yeah it defiantly needs some refinement.

He’s got a very interesting point and i agree with him to a certain degree.
The group looks really interesting, i think i’ll join it

I love the idea of trading HP for casting spells! I’ve only seen the idea before once, in ICRPG Magic. The rules don’t limit how many times you can cast a spell (so how much you cast depends on how beefy you are), and like Spwack suggested, spells can be upcast to be more powerful in exchange for inflicting more damage.

For a sword & sorc game, I think your rules are dope. Do you have a sample trauma table written out yet?

Currently i don’t have the Trauma table yet (Work in Progress).

But i am using these tables, which are just amazing.
https://www.lastgaspgrimoire.com/do-not-take-me-for-some-turner-of-cheap-tricks/#transmutation

The 4E Powers hack was mainly made to create an appeal to grittier play in 4E, which has a strong power bloat at certain tiers and levels. The experience I want to achieve with it is making people be more mindful with how powerful they’ve become, and how easy they have access to new powers every level, to the point that the gaps between two characters, even with the same level, can be too high if they chose the “unoptimized” power selections.
And as mentioned, I wanted a grittier 4E that doesn’t become a game of who can nova burst damage output the enemy first during combat.

Update: I found a similar magic system in WhiteHack. 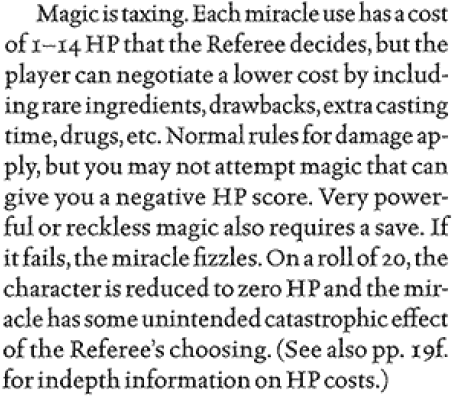