Last week, my players fought one of my favorite homebrew monsters: the transforming golem. This is the write up that one of the combatants involved created, and I thought it was sweet enough to share! 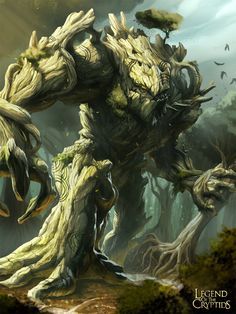 So they found themselves, face to face with a bark-skinned golem, and the gate they needed to enter behind it. Lara launched a stone at it, and the wood cracked into stone. Obsq and Stone lit their swords on fire with paste they had been given by the dog-people before. Knowing this would be an uphill battle, Stone and Obsq nodded, grabbed each end of a rope, and sprinted to the golem. Wrapping around it, they tried to trip it, but the golem’s flesh then crackled into tough knotted rope. Obsq planted his sword into it, and Stone did the same, but to their terror it burst into flames. Obsq lit up with joy as he realized “Throw a ration at it!” He kept shouting to the point of annoyance, also screaming to turn it into a fish. Obsq sprinted towards it once more and threw cheese at it, on fire and now melting into cheese, the golem became a mushy mess that slammed at Obsq, only managing to paint one side of him in cheese.

Obsq retreated once more but this time to the stairs, and Stone jumped into the water. As Stone begins being strangled underwater by the newly transformed water golem, Obsq sprints behind them and throws his sword at it, it misses but lands near Stone. Lara quickly slingshots a piece of bread to the monster, and the monster roars as the bread and water combine, making it a slushy mess. Quickly, Stone grabs his sword, and the one thrown at him, as Lara and Sameul cave to Obsq’s commands and hastily attempt to catch one the fish flitting around. When unexpectedly, Stone uses both swords to slide down the monster (NAT 20), carving a perfect baguette for the group later, as the monster falls, he turns into steel, before succumbing to his wounds. And that is how we turned a bark-skin golem into a baguette.

Details from the Referee Side
The golem was created by the King of the Darkfey, and he stationed it outside a portal to his home plane. Every d4 rounds, the portal would flicker into existence for one round, before disappearing for d4 rounds again.

The golem is pretty beefy, and has one really strong smash attack. However, it has a really cool ability: Skinshift: anytime it touches a new surface its skin transforms into that material (excluding the rock floor it’s standing on) so slashing it with a sword turns into steel and makes even harder to damage, and increases the effectiveness of its attacks.

The golem was not meant to be fought directly, but I rolled absolutely terrible with it which resulted in it doing barely any damage. I thought my players would try to kite it, or distract it, or run for the portal but they were enthralled by the creature and were determined to kill it. And they did it, through some well-timed luck and some gonzo ideas. Well done pc’s!

Now this is one bad boi!

Skinshift: anytime it touches a new surface its skin transforms into that material (excluding the rock floor it’s standing on) so slashing it with a sword turns into steel and makes even harder to damage, and increases the effectiveness of its attacks.

This is awesome, definitely going to be using this. How do you handle magic attacks against a monster with skinshift?

None of my players last week had access to magic but I imagine I’d handle it one of two ways: